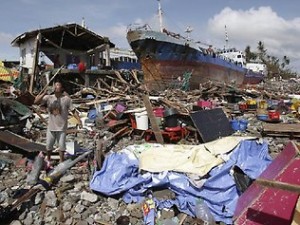 The death toll from the typhoon that ravaged the central Philippine city of Tacloban could reach 10,000 people, officials said on Sunday.

Haiyan, one of the strongest storms to hit land in recorded history, is headed toward Vietnam and was forecast to reach the country south of Hanoi around 7am local time.

The estimate was made after the extent of massive devastation became apparent and horrified residents spoke of storm surges as high as trees.

Regional police chief Elmer Soria said he was briefed by Leyte provincial Gov. Dominic Petilla late Saturday and told there were about 10,000 deaths on the island, mostly by drowning and from collapsed buildings.

The governor’s figure was based on reports from village officials in areas where Typhoon Haiyan slammed Friday.

Tacloban city administrator Tecson Lim said that the death toll in the city alone “could go up to 10,000.”

About 300-400 bodies have already been recovered, Lim said.

The typhoon barreled through six central Philippine islands on Friday, wiping away buildings and leveling seaside homes. Most of the deaths and destruction were on Leyte Island, where Tacloban is located.

The typhoon weakened Sunday as it approached central and northern Vietnam where authorities evacuated more than 500,000 people.

“The rescue operation is ongoing. We expect a very high number of fatalities as well as injured,” Interior Secretary Mar Roxas said after visiting Tacloban on Saturday.

“All systems, all vestiges of modern living – communications, power, water – all are down. Media is down, so there is no way to communicate with the people in a mass sort of way.”

President Benigno Aquino III said the casualties “will be substantially more” than the official count of 151 as of Sunday – but gave no figure or estimate. He said the government’s priority was to restore power and communications in isolated areas to allow for the delivery of relief and medical assistance to victims.

The Philippine Red Cross and its partners were preparing for a major relief effort “because of the magnitude of the disaster,” said the agency’s chairman, Richard Gordon.

Earlier, a Red Cross official said 1200 people were estimated to have died in the Philippines in the devastation wrought by the storm.

The Red Cross said that at least 1000 had been killed in Tacloban and 200 in Samar province. Many of the dead in Tacloban were seen floating on the water, the agency said.

Haiyan, one of the strongest storms ever recorded, slammed into the central Philippines yesterday morning forcing hundreds of thousands from their homes and knocking out power and communications in several provinces.

But the country appeared to avoid an even worse disaster because the rapidly moving typhoon blew away before wreaking more damage.

Typhoon Haiyan left the Philippines early today on a path toward Southeast Asia, the US National Oceanic and Atmospheric Administration tweeted.

Forecasters say the storm is expected to pick up renewed strength over the South China Sea on its way toward Vietnam.