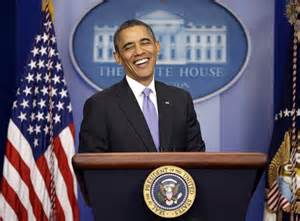 US President Barack Obama says 2014 “can be a breakthrough year for America” after a long era of recession and slow recovery.

Obama spoke on Friday as he concluded his fifth year in office.

He and his family were departing later in the day for a holiday in Hawaii.

Asked if this year had been the worst of his presidency, he laughed and said, “That’s not how I think about it.”

Obama’s polls are at or near the low point of his tenure in the White House.

The president took questions a few hours after the government announced the economy grew at a solid 4.1 per cent annual rate from July through September. That’s the fastest pace since late 2011 and significantly higher than previously believed.

Much of the upward revision came from stronger consumer spending at a time when unemployment is at a five-year low of 7 per cent.

Obama did not mention it, but the stock market is also at or near record levels.

In his review of the year, Obama also noted that US combat troops finally will be withdrawn from Afghanistan during the coming year.

He also again promised to speak in more comprehensive terms about the future of National Security Agency surveillance programs.

“I have confidence that the NSA is not investigating in domestic surveillance or snooping around,” he said.

Yet he added, “we may have to refine this further to give people more confidence”.

A federal judge has ruled that some of the NSA’s activities were likely unconstitutional.