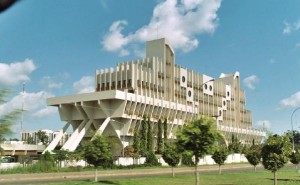 The Army barracks in Bama, Borno State was in the early hours of yesterday, attacked by terrorists who came from cells located across Nigerian Border with Cameroun through Banki town, the Defence Headquarters yesterday confirmed.

According to the DHq, high calibre weapons such as anti-aircraft and rocket propelled guns were freely used in the attack that lasted several hours.

Director of Defence Information, Major General Chris Olukolade, noted in a statement that “Ground troops backed by the Air Force have repelled the attack and are in pursuit of the insurgents.

“Details of casualties recorded in the incident will be released when the ongoing cordon and search operations in the general area is concluded” Olukolade said.