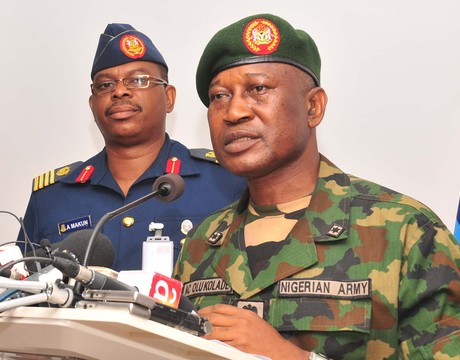 The Defence Headquarters on Monday disclosed that Nigerian security forces launched ground and air assaults on terrorist locations in a forest at Alafa, about 21 kilometres from Bama, Borno State.

Director of Defence Information, Maj. Gen. Chris Olukolade, said in a statement that over 56 suspected terrorists were killed in the ensuing intensive gun battle over the weekend.

He, however, noted that two soldiers sustained battle wounds in the operation.

The statement said: “Acting on intelligence reports which indicated renewed efforts by the terrorists to establish a new camp in the forest locations, the land and air operations had inflicted heavy casualty on the insurgents as indicated by the high level loss of their men and materials.

“Air and land bombardments are continuing in different locations where terrorists have been reportedly sighted.

“In another development, troops of the Multi-National Joint Task Force have foiled an attempt by terrorists who were massing up on an island on Lake Chad with a view to carrying out an attack on some Nigerian communities.

“Seven of the terrorists died while others fleeing in different direction towards Niger and Chad Republic are being trailed by troops.

“Intelligence reports have confirmed that some of the wounded terrorists were seen in a canoe paddling towards Tumbun Telkandam in Chad Republic”, the statement said.