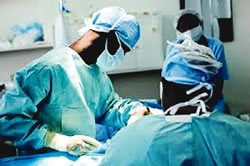 As the year 2013 gradually comes to an end, Nigerians are in for another round of industrial action this time from medical doctors, as the Nigeria Medical Association (NMA) has given notice of the commencement of a five-day nationwide warning strike beginning from Wednesday.

The association also threatened to make the strike total and indefinite should the federal government fail to take advantage of the opportunity presented by its 5 day warning strike to meet all her demands.

National President of NMA, Dr. Osahion Enabulele, who spoke with reporters in Minna, the Niger State capital on Sunday after the National Executive Committee meeting and an Emergency Delegates Congress of the association, said the doctors were constrained to declare the industrial action due to the extremely poor progress in the resolution of their demands after expiration of several ultimatum issued to the federal government.

The NMA President lamented that unions now have to resort to strike because government “seems not to appreciate the need for constructive dialogue but only respond to strike actions”.

Describing the development as a sad reflection of the state of affairs in the country, the NMA President expressed sadness that industrial actions have now become the order of the day in the country today.

Dr. Enabulele threatened further that if the warning strike fails, the association would have no other choice than to resort to total strike.

“For now, what we have issued as a test to the commitment of government is a warning strike. We hope the federal government would rise up to its responsibilities and use this opportunity to address the issues presented to it because if this fails, we may have no choice than to declare a total strike action.

“We feel the federal government is either taking us for a ride or the strategy being employed by us is not appreciated. Handling our issues with levity is what has led us to declare this warning strike action”.

He further said that if not for the yuletide season, the association would have declared a total strike action because according to him “members felt they have been pushed to their limits but they considered the delicate period and the interest of Nigerians which they have at hand.

“The reason for the strike being five days is to give allowance to our people. Our members were agitating for a total action because they felt they have been pushed to their limit but we recognize that this is a delicate period and Nigerians need to be given some allowance during this period. We hope the federal government will utilize the opportunity to resolve the issue on ground”, he said.