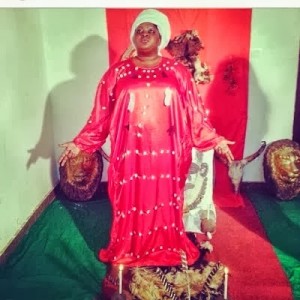 Remember when I ran an exclusive on how Olamide aka Baddo’s trademark pose from his album cover had gone viral?

Large sized Nollywood actress, Eniola Badmus has taking the infamous gun man pose to another level as she shared the above photo.

The actress did the mainstream pose, which was hyped by rapstar Olamide in a shrine.

Just like you, I pray this shrine is off a movie set oooh!