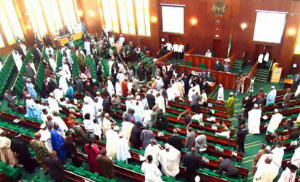 The Public Accounts Committee, PAC, of the House of Representatives revealed at the weekend that over N4 trillion was spent from 2004 to 2012 by the Federal Government from Service-wide Vote without the approval of the National Assembly.

The committee said due process was not followed in the manner such a huge sum was lavished, noting that it contravened Section 80 of 1999 constitution.

The committee also alleged that between 2005 and 2006, the government of former President Olusegun Obasanjo spent N250 million to feed former President of Liberia, Charles Taylor and his family, who were on an asylum in the country.

Chairman of PAC, Adeola Olamilekan (APC-Lagos), who disclosed these at a briefing of journalists, said the expenditure was made without parliamentary approval, starting from the government of President Obasanjo to that of President Goodluck Jonathan.

Olamilekan explained that “most of the expenditures to which the Service-wide Vote releases were deployed are routine in nature and did not qualify for emergency funding.

“Between 2004 and 2005, N250 million was spent on the upkeep of the former Liberian President, Charles Taylor, another  N14,006,494.847.57 was also released from the Service-wide Vote for the payment of judgement debts against the Federal Government.

He also alleged that over N160 million was released for the Budget and Accountant General’s offices.
He said further:  “The expenditure of N162million from the 2011 Service Wide Votes releases tagged; “Closing Accounts” incurred jointly by the Office of the Accountant-General and the Budget Office of the Federation.

“Successive governments have from 2004 to 2012. Spent a whopping N4.17 trillion  as against N1.8trillion  approved by the National Assembly as Service Wide Votes component of the budgets of those years, translating to N2.27trillion extra budgetary spending or 220% above the Service Wide Votes as approved in the budget for the period.”

He explained that “such extra-budgetary expenditures constitute a breach of Section 81 of the Constitution of the Federal Republic of Nigeria, 1999(as amended) and an illegality.”

Olamilekan also said PAC  discovered in the course of its oversight that the Service-Wide Vote was converted to a recurrent fund by the government, instead of an infrastructure vote.

“Such releases were mainly used to finance recurrent expenses not targeted at critical and strategic sectors of the economy and the releases were random and did not follow any clear pattern.

“The Service Wide Votes had become an alternative budget which government prefers to patronize than the annual budget, leading to poor implementation of the annual budget as approved by the National Assembly,” he added.

The report was earlier last Thursday presented by Olamilekan to the House which resolved that the committee should do more on its findings and present another report within two weeks.

The Service Wide is the fund set aside for emergency purposes. [Vanguard]