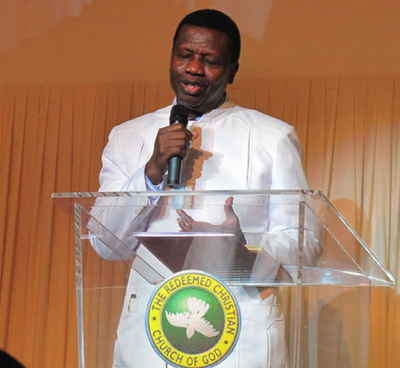 General Overseer of the Redeemed Christian Church of God, RCCG, Pastor Enoch Adeboye, on Saturday debunked the claim that he is suffering from a terminal illness and is soliciting for funds to enable him travel to India for medical treatment, saying the story was the handiwork of impersonators out to extort unsuspecting members of the public.

The calm speaking pastor of what has been described as the fastest growing Pentecostal church in the world, who was speaking during the just concluded 16th Holy Ghost Congress at the Redemption Camp on the Lagos-Ibadan Expressway, warned Nigerians to be wary of such dubious characters parading themselves in social media purportedly soliciting for funds on his behalf.

“Some people have been impersonating me on Facebook and other social media asking people to donate monies for unidentified orphanages or some sick persons who require urgent medical treatment abroad. Please do not believe them and do not give them money”, Pastor Adeboye said.

He added that “Somebody even went to the ridiculous extent of saying that I needed money to go to India for the treatment of an undisclosed ailment. Please do not answer them. As you can see I am not sick. I am hale and hearty. They are liars”.
Continuing, Daddy G.O as he is fondly called by admirers said some others are equally impersonating his wife, Folu, stressing that such persons are not representing him or his wife. According to the highly revered pastor, some other fellows are busy sending e-mails to people inviting them to fake programmes purportedly organised by him.

“If anybody invites you to any programme anywhere in my name, please confirm from me. There is also one that said I had a dream where I saw many of my people weeping because they could not make it to heaven. It is all lie! I did not have any dream and I know that you will all make it to heaven in Jesus name”, he stated to a thunderous response of “Amen!”

On the recent stories by some persons, who claimed that they died and were shown heaven and hell but were purportedly sent back to warn brethren, who are perceived to be wallowing in sin, Adeboye said such people should not be taken seriously because God does not operate the way they are portraying Him.

“There is woman who said she died and went to heaven where Jesus sent her back to warn people of the world against sin. If you do not know already, when the rich man died and saw Lazarus in the bosom of Abraham, he requested that Father Abraham should send an angel to his relations on earth to warn them to repent and escape hell. He was told that there are enough prophets to accomplish such missions”, Adeboye stressed.

The pastor while admonishing the congregation to flee from anyone, who claims to have died and returned to preach the gospel, said “please do not listen to them. Put your trust in the true Word of God. Some years ago, one man claimed to have died and came back and he started preaching that any Christian who acquired a car would go to hell.

“This man produced a CD which he was selling to the people and he made a lot of money from selling the cassettes and CDs. Not long after, he bought a Land Cruiser and when people asked him why he was opting for hell, he replied that he did not buy a car. He bought a Land Cruiser. Be careful, you shall know the truth and the truth shall set you free”, the RCCG General Overseer said.

The Holy Ghost Congress is an annual programme of the RCCG and the theme of this year’s event tagged: “The Overflow”, held from December 9-14 at the Redemption Camp along the Lagos-Ibadan Expressway.