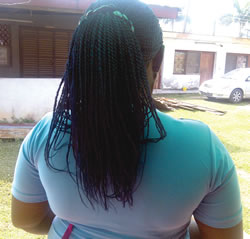 My husband married me a virgin , I was HIV negative and so was he when we got married. Certain things happened to me that exposed me to unhealthy practices and I believe strongly that that was how I got HIV.

Did you do HIV tests before you got married?

Yes, we did. It was a compulsory test before getting married. We were both HIV negative.

When did you realise you had the virus?

It was in 2007. I got pregnant and was asked to do some random tests. That was how I found out I was HIV positive.

Do you know how you contracted the virus?

Sometimes, it’s difficult to tell because there are so many ways through which one can get the virus but you can trace it if you vividly remember the activities you engaged in for some months and years.

Can you explain what you mean by activities one engages in?

In my case, my husband married me a virgin and like I told you earlier, I was HIV negative and so was he when we got married. Certain things happened to me that exposed me to unhealthy practices and I believe strongly that that was how I got HIV.

I could not conceive when I got married. My husband was not worried because it was a young marriage, but his family members were not happy with me. They said all sorts of nasty things to me and tried to get my husband to send me out of the house. It created tension in my home. I went to different churches and herbalists within and outside Lagos. In the herbalist’s home, I was given incisions with a razor blade. I received the incisions on two different occasions. Then in 2007, my mother-in-law arranged a new wife for my husband behind my back.

Did he tell you about the new wife?

No. In fact, I didn’t know until much later. It was one of my friends in the village that told me what my mother-in-law had been up to. My husband just told me that he was going to our village to see his mum. I did not suspect anything. It was on that trip they introduced the new wife to him. He rejected the wife and came back to Lagos but he did not tell me anything. One day, one of my friends called me and asked me if I knew what my husband came to the village for. She narrated the scheme to me and I confronted my husband. He said he didn’t tell me because it would hurt me. He reasoned that since he didn’t take the wife, I would be happy not knowing what transpired in the village.

It was that same year my in-laws wanted to get another wife for my husband that I got pregnant. That is why I counsel women that patience is everything. I got pregnant when God was ready to give me a child. It wasn’t the herbalist or white garment churches that made it possible. They gave me some very horrible concoctions to drink in those churches after praying on them. They took me to rivers to have my bath. When I saw that all those things were not working, I stopped. Several months after, I just discovered I was pregnant. In fact, I remember vividly that at the herbalist’s place, I didn’t give them the blade that was used for the incisions. That was the least thing on my mind, I just wanted a baby.

How many people did you see at the herbalist each time you went?

Quite a few, mostly women and it was the quest for children that took them there. They also got incisions.

Was it with the same blade?

How did your husband receive the news of your status?

Do you experience any sort of stigmatisation?

No, my status is known to only my husband and I, and he has never used it to taunt me in any way. That is how I know that he truly loves me. Of course, it took him some time to get over it, it was very gradual but he took it calmly. We were both very sad. We went for counselling together. I told him that it was my desperation to have a child that forced me to seek alternative measures. He didn’t know I went to all those places. He’s very understanding and I sometimes wonder if he’s for real.

What steps do you take to ensure he remains negative?

We have two children now and they are both negative. He uses a condom and whenever we are trying to procreate, we are both placed on drugs to ensure that he doesn’t contract it.

I have spoken to a few women who share similar experiences with you. What advice would you give to women, especially the married ones that are yet to have children?

I wish our society would just leave couples alone and stop interfering with whether they have children or not. That is the problem, everyone feels they should have a say in one’s marriage. The first step is that couples should not allow family members or friends tell them what is best for them. Also women should be patient. Just look at me, if I had been patient, all these would not have happened to me. Couples should know that God’s time is the best. I also want to say that HIV does not kill. What kills is depression and laziness. Some people will say because they are HIV positive, they will stop working and start being dependent on others. Being dependent on other people will affect one’s psyche, lead to depression and eventually death. In addition I will advise people, spread the news, but don’t spread the virus.