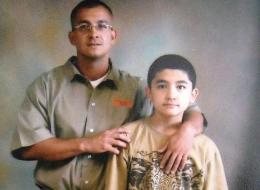 Right after lunch, the warden called inmate number 07031-078 into his office. Jason Hernandez was worried. The last time he was called to the warden’s office, he learned his brother had died, so he thought he was about to find out another family member had passed. That’s pretty much what life without parole means: sitting in prison, watching as family members die, until you do.

Hernadez, now 36, has spent nearly half of his life behind bars. He’s been in federal prison since he reached the legal drinking age. He didn’t kill anyone, and he didn’t have a long criminal record. He just sold the wrong kind of drug, crack cocaine, which triggered a harsh mandatory minimum.

A month after his 21st birthday in 1998, Hernandez was arrested in Texas and charged as part of a drug conspiracy that dated back to when he was just 15 years old. He only had one prior adult conviction — a misdemeanor for failing to pull over his car in a timely matter — and a couple of juvenile convictions for gun possession at 14 and 17 years old.

Hernandez was sentenced the same day as his supplier. Both were charged with distributing the same amount of cocaine, but the drug Hernandez sold was crack. At the time, there was a 100-to-1 sentencing disparity between powder and crack cocaine. So while his supplier only got 12 years in the can, the judge reluctantly sentenced Hernandez to life behind bars, leaving his eight-month-old son Estevan to grow up without a father at home.

But his call to the warden’s office turned out to be good news. Hernandez was one of eight federal prisoners convicted of crack cocaine offenses whose sentences were commuted by President Barack Obama last week, despite Obama’s poor track recordon pardons and commutations.

At first, Hernandez didn’t believe it.

“I started crying right there, I started shaking,” he told The Huffington Post in a phone interview, limited to 15 minutes, from the federal penitentiary in El Reno, Okla., on the day after Christmas. “I still couldn’t believe it. I asked, could you show me on the computer where it says this, because maybe somebody is playing a hoax on us, on you. I said, I don’t think this is true. The lady looked it up, and it said I had 20 years. I had a release date.”

Hernandez had imagined what this would feel like. He’d be screaming for joy, jumping, hollering, singing, dancing. But it hasn’t been like that. He’s had trouble breathing. His heart has been racing. Sometimes he can’t talk, can’t think, can’t move. Then there’s the guilt.

“There’s more inmates like me, probably more deserving than me, who didn’t believe that such things could happen,” he told HuffPost. “When I received my reduction, I couldn’t even look at the guys no more, I just felt bad for them. I couldn’t look at them in the eyes. I told them that, look, when I get out there, I’m not going to stop fighting, I’m going to continue doing what I’m doing.”

Hernandez still has plenty of time in prison: while several other defendants will get out in April, his current projected release date isn’t until Aug. 11, 2015. But in the week since he learned his sentence was commuted, he’s been planning. He says he’s got a lot to prove once he gets out. He plans to live with his parents and work on behalf of prisoners still in the system — and he’d love to meet Obama one day, so he can advocate for other prisoners directly.

“I’ve got to do what I can to show Obama that the decision to let me go was one of the greatest that he’s ever made as a president and as a man,” Hernandez said. “And hopefully I can open the door and show him … some other guys need second chances too.”

Hernandez also hopes to advocate for a further reduction in the crack-cocaine disparity, which, even after 2010’s Fair Sentencing Act, remains at 18-to-1. The law did not apply retroactively to prisoners like him, who were sentenced back when just a five grams of crack could trigger the same mandatory minimums as 500 grams of cocaine.

“Based on compromise from Congress, and not reason, there’s thousands and thousands of people in here still serving extensive sentences, the majority of whom are African-American and Hispanics,” Hernandez said. “So 18-to-1 is good, retroactivity of the 18-to-1 is good, but it’s not right until it’s automatically eliminated … There shouldn’t be no discrepancy.”

Soon after learning his fate, Hernandez dashed off a note using the Bureau of Prison’s email system to the American Civil Liberties Union’s Jennifer Turner, who authored a report that called attention to his case and hundreds of others. He wanted to say thanks.

“I GUESS YOU COULD COMPARE IT TO THE PERSON WHO ONE THE MEGA-MILLION LOTTERY THE OTHER DAY… BUT HITTING IT TWICE IN A ROW,” he wrote.