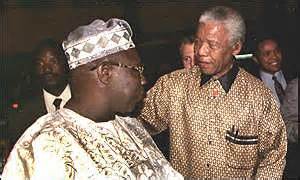 Nigeria’s former president, Chief Olusegun Obasanjo, has described the late Nelson Madela as a man who raised the beacon of human struggle to lofty heights of nobility.

Obasanjo, who addressed journalists in his home in Abeokuta on Friday, said Mandela’s life was an example of what people should all aspire for.

“In all situations, he lived nobly and died in nobility. Let us bear in mind that we all have the opportunity to act nobly in whatever position we find ourselves,” he added.

He described Mandela’s death as a monumental loss to all human races and called on all to emulate the life and times of the great leader.

“When we teach our children lessons for tomorrow, let us remember lessons Mandela gave the world in forgiveness and forbearance,’’ Obasanjo said.

Obasanjo, while extolling the virtues of the departed world leader, recalled the time when he was voted to become South-Africa’s post-apartheid president.

“During the first non-racial democratic elections in 1994, I was on election observation assignment in South Africa and was there for his campaign and when he cast his vote.

“He was devoid of bitterness or anger against anybody except the hated apartheid system.

“He went on to win the election and more importantly led South Africa to the extent that the country was able to cast aside its apartheid legacy and take its place in comity of nations.

“Certain that his task was completed, Mandela modestly refused to seek re-election after his first term in office as his presidency elapsed.

“I still recall his pragmatic words when he said to me ‘Olu, show me a place in the world where a man of 80 years is running the affairs of his country.

“This, to me, reflects an unequalled sense of modesty for a man who spent 27 of the prime years of his life in prison for a just cause.

“Yet he still kept a calm and peaceful disposition to those who took away his freedom for all those years of his life,’’ he explained. [NAN]