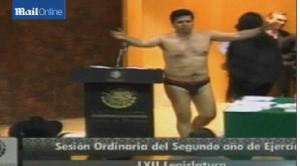 Forget filibusters and picket signs, a good old-fashioned striptease is the new way to protest the passage of a bill.

Demonstrating how a new energy bill would potentially strip Mexico’s land of its oil and be a “plunder to the nation,” Congressman Antonio Garcia Conejo of the Democratic Revolution Party stripped down to his underwear during a speech in front of Mexico’s congress on Wednesday, the BBC reported.

“This is how you’re stripping the nation. Where is the benefit?” he told the assembly.

The historic new energy bill will allow foreign private energy companies to drill for oil and gas in the country for the first time since the country nationalized oil in 1938. Since then, state-run oil company Pemex has had a monopoly on production in the country, according to CBS News.

Fearful that the bill would bring U.S. domination over Mexico’s oil, as was the case before 1938, other oppositionists also attempted to halt discussion of the bill by blocking the entrance to the main chamber of the House of Deputies with chairs and tables, CBS reported. As voting began for the bill, they continued to disrupt proceedings by shouting “The homeland is not for sale! The homeland is not for sale!”

However, the bill passed with a sweeping majority in the Chamber of Deputies with a final vote of 354 to 134. It had been approved by the Senate one day earlier, per the BBC.

Most oil analysts and members of President Enrique Pena Nieto’s Institutional Revolutionary Party and the conservative National Action Party see the bill as an opportunity to turn around the nation’s oil industry, which has declined 25 percent since 2004, despite increased investment, the BBC also writes.

The final step before the bill is put in place is approval from 17 of Mexico’s 31 states.