A 34-year old Nigerian trader was apprehended at the Lagos airport over attempt to smuggle 16.335 kg of cannabis concealed in foodstuff to Dubai. 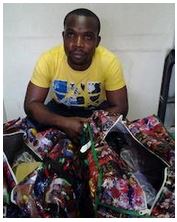 Obi Chinweike, who hails from Uli in Anambra State, was arrested at the Murtala Muhammed International Airport by officials of the National Drug Law Enforcement Agency (NDLEA).

The suspect, who sells clothes in Ikorodu area of Lagos, was busted during the screening of passengers for Etihad Airways flight. Ten parcels of cannabis were discovered inside two of his big bags.

“Our search team detected 16.335 kg of dried weeds that tested positive for cannabis at the luggage screening area. The cannabis was hidden in a false bottom of the bags containing yams, garri and other foodstuff. The suspect, Obi Chinweike who is a trader is currently assisting the investigation team.”

The suspect claimed he was offered $1,000 to deliver the drugs to Dubai:

“I was given the drug at Onitsha by a friend who paid me $1,000 to smuggle the drugs to Dubai. Unfortunately, I was arrested in the process. I am from a poor home, I dropped out of school in 1996 in Senior Secondary class one due to lack of funds”.

The Chairman/Chief Executive of the NDLEA, Ahmadu Giade, warned drug traffickers to quit the criminal trade or face the consequences as contained in the NDLEA Act.

“If drug barons fail to quit the criminal trade, they will continue to be arrested and prosecuted. This arrest and similar ones are clear signals that drug traffickers will end up in prison custody if they fail to quit. The Agency has intensified search operations at all exit points,” Giade was quoted as saying.