Rihanna revealed her sexy Santa costume on Monday. But by Tuesday, Riri’s idea of a Christmas celebration included roll ups and lip synching to Mariah Carey. 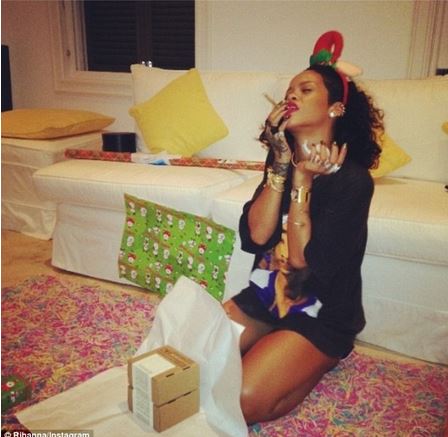 ‘Lip synching to @mariahcarey Christmas album is my favorite thing to do at this kinda time!!! #MERRYCHRISTMAS,’ the 25-year-old singer shared on Instagram.

Christmas tradition: Rihanna shared this snap of of smoking a roll up whilst listening to Mariah Carey songs and wrapping presents

What’s wrong? Rihanna later shared this depressing holiday photo of her dressed as a reindeer, saying ‘And she gon’ shake it…’ – perhaps referring to the song She Gon Shake It (Like Red Nose)

Along with her caption was a photo of the Diamonds singer kneeling on the floor, clad in a large Tupac shirt as a blunt-like cigarette dangles from her red pout.

The star – whose eyes remained shut – appears to be wearing a metallic grill, and adding a festive touch, the Barbadian beauty donned a red and green elf-inspired headband.

The star multitasked during her musical session – seen holding a roll of scotch tape in her hand as a couple boxes sit on the floor in front of her, waiting to be wrapped.

A roll of Christmas-themed paper is also laying on the white couch behind her.

Leaving little to the imagination: Rihanna donned skimpy lingerie in a series of new pictures posted to Instagram on Monday

On Monday, Rihanna wore a scantily-clad ensemble to her friend Leandra’s Christmas-themed Lingerie Party at Priva Barbados Lounge and Night Club on Monday, adding on a shaggy St Nick coat upon leaving.

But the coat didn’t stay on for too long, as Rihanna opted to leave little to imagination in a series of pictures posted to Instagram earlier that day.

The Stay singer was wearing the same skimpy red nightie that featured sheer lace on the bust and a satin collar during the house party.

She paired the barely-there number with thigh-high tights and black booties whilst wearing her dark hair in cork-screw curls and complementing her negligee with red lipstick.

Saucy: The singer donned a skimpy red nightie that features sheer lace on the bust and a satin collar

In another, she kneels on a bed giggling, covering her face once again as a friend dressed as Santa lies beside her.

She is also seen kneeling on the same bed as she looks over her shoulders, a picture of a woman in a G-string visible on the wall behind.

Girl time: In another snap, she kneels on a bed giggling, covering her face once again as a friend dressed as Santa lies beside her

In the snaps, the curly haired songstress shows off her legs in a short sweater dress with a picture of slain rapper Tupac Shakur emblazoned on the front.

Family fun: Rihanna cuddled up to her family members in a series of festive snaps she posted on Instagram on Christmas Day

That’s not very festive: While her reindeer antlers are extremely Christmassy, Rihanna’s Tupac Shakur sweater dress doesn’t quite fit with the theme

However, she sports a huge smile as she and her family enjoy the day. She needs all the rest she can get as she gears up to front French fashion line Balmain.

The singer, who has a hand in designing her own range of outfits for River Island, will be the face of label’s Spring 2014 range, which launches in January.

Warm Christmas: Rihanna is spending the holidays in Barbados with her family, pictured in an Instagram snap on Sunday