he Economic and Financial Crimes Commission, EFCC, has uncovered how Steve Oronsaye, a former Head of Service, and other top directors of the Nigerian civil service colluded to allegedly defraud the nation of about N6.2 billion pension fund. 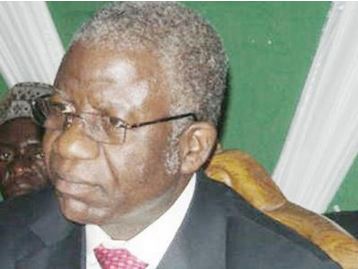 The fund, allegedly stolen through a maze of bogus contracts, was meant for biometric enrollment and payment for computer accessories that were never supplied.

Mr. Oronsaye, 63, was appointed the Head of the Nigerian Civil Service in 2009.

According to a reliable source in the EFCC, between 2009 and 2010, almost N6 billion in fake contracts were awarded and paid for under Mr. Oronsaye’s supervision.

A few weeks ago, Mr. Oronsaye was invited by the anti-graft commission to answer questions relating to the multi billion naira pension fund.

Mr. Oronsaye wouldn’t comment for this story. When he was contacted on Sunday, the former head of service said he was in a meeting. He has since not responded.

According to the EFCC, Innovative Solutions and Project Limited, a company allegedly handpicked by Mr. Oronsaye, received a contract of N63 million for biometric data capture. The contract, however, served as a conduit through which three individuals and five companies got N705,368,245.

Other companies which had no contract to participate in the biometric data capture exercise but were paid include Frederick Hamilton Global Limited, who received N119,398,500; Xangee Technologies got N153,146,719; Fatidek Venture received N30,056,000; while Obanlado Enterprises was paid N96,765,400.00.

During its investigations, the EFCC uncovered how Phina Chidi, a deputy director in the Pension Account at the Office of the Head of Civil Service of the Federation, OHCSF, who had given a written statement to the commission in January, 2011, disclosed to the agency how she was made to shop for companies that would execute contracts and make returns to Mr. Oronsaye.

“I was asked by Dr. Shuaibu (Teildi Shuaibu, director, Pension Account) to shop for company names to execute our contracts, proceeds of which should be given to Mr. Stephen Oronsaye  the then Head of Service,” Mrs. Chidi said in her latest statement.

Mrs. Chidi also detailed how the proceeds of such deals were kept in the accounts of two banks before Mr. Shuaibu helped to transfer them to Mr. Oronsaye.

Individuals who benefitted from the string of payments, allegedly made on the eve of Mr. Oronsaye’s retirement as Head of Service, include Kate Chinwe Obiekwe, Ibrahim Abdulkarim and Mohammed Abdullahi Ahmed who were paid N56,612,585.00, N80,108,640.00 and N23,760.00 respectively.

The trio, who are officials of the OHCSF pension, received the “collective allowance” – allowances paid out to an officer of the OHCSF for distribution to other staff who are supposedly meant to be on a trip, contrary to Federal Government directives on e-payment.

Others who also benefitted from the payments include Innovative Solutions and Project Limited and Vivians Ebony Nigeria Enterprise.

The former is said to have a N63 million worth of contract with the Office of the Head of Service but its emergence as the preferred contractor is in breach of the procurement process since the contact for the biometric exercise was not advertised. Also, a Certificate of no-objection was not obtained by the office of the Head of Service from the Bureau of Public Procurement, BPP, although Mr. Oronsaye allegedly indicated in his statement before the EFCC that he made an informal request to the BPP about the process involved.

Apart from breaching the procurement process, the contract awarded to Innovative Solutions and Project Limited was also fraught with a series of irregular and inflated payments made to the company, according to the EFCC.

Robert Ikhaziboh, the Chief Executive of the company, admitted to EFCC investigators that he was instructed by one Osarenkhoe Afe, an IT consultant and nominee of Mr. Oronsaye as member of the Pension Reform Committee, to work with two companies – Upstrach Communication and Federick Hamilton Global Limited – with specific instructions on the amount to pay the companies whenever he received payment.

Under questioning by the EFCC on December 7, PREMIUM TIMES learnt, Mr. Oronsaye claimed ignorance of some of the companies that had received bogus payments and had been traced back to him.

Mr. Oronsaye also claimed ignorance of Xangee Technologies, Fatidek Ventures and Obalano Enterprises and said he never approved any payment to them.

However, when provided with evidence of payment to these companies, Mr. Oronsaye became silent, sources at the commission said.