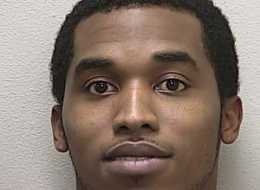 Wait guys, I think we need to go back…

Police in Florida (where else?) got a bit of unexpected help during an armed robbery investigation in Ocala, Fla., when they discovered a wallet left at the scene of the latest crime.

Following a holdup at a Quick King convenience store on the night of Dec. 13, K-9 units tracked the suspects to a dirt driveway behind the store where they recovered a wallet belonging to Keith Ray Howell, reports My News 13.

A search of Howell’s house uncovered more potentially incriminating evidence: a ski mask with eye holes in the trash, per My News 13.

Four days later, on Dec. 18, Cpl. Micah Moore pulled over a silver Altima after noticing it had a tail light out, reports the Ocala StarBanner. Moore became suspicious when he saw Howell, who had been driving the car, jump into the back seat as he approached the vehicle, leaving the driver’s seat empty.

Deputies eventually searched the car and found marijuana, leading to Howell’s detention. Back at the station, the police began to piece together the case, according to the StarBanner.

The 22-year-old Howell has since been charged with possession of marijuana, driving with a suspended license and robbery with a firearm, according to the Marion County Jail. Howell is due in court on January 21.

Surprisingly (or maybe not), this is not the first time a suspected robber has been caught after leaving his ID behind at the scene of a crime. In 2011, Walter Gunter allegedly robbed a Pittsburgh 7-Eleven but left his wallet at the counter, according to CBS Pittsburgh. In a similarly bone-headed move, Boston mugging suspect Zachary Tentoni was quickly arrested and charged with unarmed robbery in June after he snatched a woman’s wallet and ran off, leaving behind a shopping bag containing his birth certificate and a letter sent to him by his mother, reports ABC News.