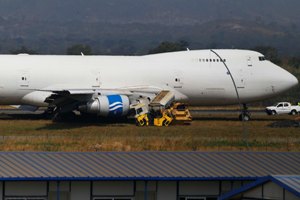 The uproar generated by the purchase of two BMW bulletproof cars by the Nigeria Civil Aviation Authority, NCAA, has barely died down than another government agency has been revealed as being behind the purchase of 10 bulletproof cars, of which at least no fewer than five them were flown into the country by a Saudi Airline cargo plane that was involved in the Abuja airport mishap about three weeks ago.

The Saudi embassy in Abuja, which made the disclosure weekend, said the cars were meant to be delivered to the Defence Industries Corporation of Nigeria (DICON), Kaduna.

It would be recalled that the Nnamdi Azikiwe International Airport, Abuja, was shut down for almost 24 after a Saudi airlines plane hit runway repair equipment and got stuck there until it was removed several hours later.

In its statement which was meant to clarify reports in a section of the media that the cargo plane contained illegal arms and weapons, the embassy said the cargo was neither “dangerous nor prohibited,” as it was conveying 100 tonnes of bulletproof cars which were part of a supply contract for delivery to DICON in Kaduna.

“The General Authority of Civil Aviation in the Kingdom of Saudi Arabia has confirmed that the aircraft was chartered by Saudi Arabian Airline, carrying bullet-proof cars and its final destination is Murtala Muhammad Airport, Lagos, Nigeria,” the Saudi mission said in a letter dated December 20.

“The goods were a portion of a supply contract for 10 bullet-proof cars to a government agency in Nigeria, which were to be conveyed from Sharjah (UAE) via Abuja, through: fast forward cargo US UAC, to: Defence Industries of Nigeria (DICOM), 45, Ahmad Bello Way, Kaduna, through the companies contact person: Mr Nwajpudu Livinston/CCC. (sic).

“The goods were manufactured in South Africa.

It is not clear who would use the 10 bulletproof cars as efforts to get the reaction of a spokesman for DICON, Mohammed Lawal Kurfi, did not yield any useful information as he claimed ignorance of the contract and the cargo.