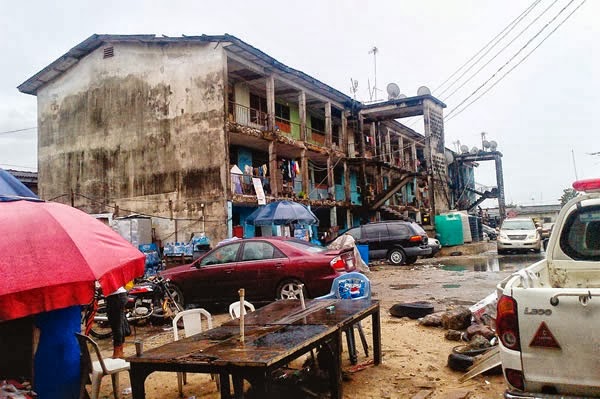 In this follow-up report to:

“DPOs’ confessions: We run police stations on bribes and charity” and “No computers, no uniforms: Sorry state of Nigeria Police,” Punch’s Temitayo Famutimi captures the sorry state of police barracks in Lagos.

It was on a sunny Friday afternoon. Inspector Joy (not real name) stopped by at the stall of a pepper seller on the premises of the Obalende Police Barracks, Lagos. After buying some spices she dashed into a beer parlour adjacent the pepper sellers’ spot.

“I really need to step down. It’s been a long and tiring day. You can join me if you wish,” she advises this correspondent who had requested to have an audience with her as she walked into the beer parlour.

This exposé captures the true state of the rot in Nigeria today. Please read on…
The traffic policewoman who later requested a bottle of stout resides in the Women Police Barracks, situated behind the Obalende Barracks.

In a chat with this correspondent in the drinks joint, she laments that her experience over the years in service has made her desist from raising her hopes too high over improvement in welfare of policemen and women.

“Do I need to explain how I feel about the state of the barracks where we (policemen and women) live in? You have seen it all yourself here. It is the same situation in many places. Please, let’s talk about other things because it appears that we have long been forgotten,” she laments as she sips a glass of beer.

After finishing the bottle of beer, Inspector Joy, who notes that she is delighted to make the acquaintance of this correspondent, asks him to join her as she heads for home.

On getting to her room-and-parlour apartment in the Police Women’s Barracks meant for spinsters, the first item which strikes the attention of the journalist is a photo frame hung on the wall of the sitting room showing Joy and a well-built man.

Asked if she is married, Inspector Joy explains that she is “somehow married”, adding that she cohabits with her man who also happens to be a policeman.

“Don’t mind the inscription you see at the entrance of this barracks as it does not apply here. In this barracks, everyone is for himself or herself. My man stays here with me and goes to work from here just as it is the practice among other couples irrespective of if they are married or not.

“Nobody conducts checks on how we are faring and that also explains why the barracks is not being maintained and has become a total eyesore,” she explains.

“The soak away recently got filled up and we had to contribute N4,000 each to get it fixed. Even the toilet we are talking about, there is nothing to write home about it. About 10 of us from three apartments make use of that dilapidated toilet and only one bathroom is usable on this floor and tens of people make use of it.

“This barracks can at best be described as a refugee camp as it is simply an eyesore and yet rent is being deducted in my salaries monthly.”

From meagre allocations that put police stations across the country at the mercy of charity from communities and criminals, the appalling dwelling places of policemen adds up to the several factors which make the Nigeria Police Force one of the most uninspiring institutions to work for many people.

From Obalende, Surulere, Iponri, Bar Beach to Women’s Police barracks, all in Lagos the story is that of a sad tale of utter neglect. But the picture is similar in other states of the federation. While the sewage pipes in many of the barracks visited are damaged, their rooftops bristling with satellite dishes were adorned with largely broken, sagging roofing sheets – many of which have indeed fallen off.

A visitor to the Surulere Police Barracks could think that it has been turned into a motor park as seven commuter buses were parked on the premises during this correspondent’s visit. Besides, two drinking joints sited on the premises of the barracks have also eaten up available breeding space, thus confirming the lack of close monitoring from the authorities.

At the Bar Beach Barracks, only four of the over 20 blocks occupied by inspectors show signs of renovation. All others were in dilapidated conditions.

During our correspondent’s tour of the dwelling places of the policemen, the Alausa Barracks, however, stands out amongst its peers as it is generally in a good condition. It was gathered that the police authorities recently carried out renovation works on it.

Home to rodents and reptiles
On the whole, apart from lacking in basic aesthetics, the barracks are largely in dilapidating conditions with many structures fallen off or on the verge of giving way. For instance, at the Surulere Barracks, it was observed that rodents and reptiles moved in freely into the kitchens, toilets and bathrooms as the windows and doors have been broken off and have yet to be fixed. Also, the cement castings covering the decking on some of the storey buildings are already giving way.

Besides, the open drainages and broken sewage pipes oozed out a repugnant smell while houseflies and other insects capable of transmitting diseases had a field day.

Sadly the budget of the Federal Government makes provision for the rehabilitation of police barracks on a yearly basis. For instance, in the just concluded year, the National Assembly allocated the sum of N425,060,826 for the rehabilitation and repairs of police stations and barracks across the country. Yet the state of many of these structures remain abysmal across the country.

No alternative to broken barracks

Findings reveal that in spite of the sorry state of the barracks, policemen and women still jostle to get accommodated in them. It was gathered that police officers and men usually ‘water the ground’ often by giving bribes to some officials attached to the provost offices in the various state police commands.

A police corporal at the Bar Beach Barracks, Lagos explains that before he got his apartment, a colleague of his who was moving out influenced the allocation to him.

“After meeting with the colleague of mine parking out of the barracks, I tipped him and he took me to the office of the provost where we also watered the ground. Afterwards, I got the apartment allocated to me,” the police corporal says.

Asked why he chose what looks like a life of squalor with his family in the barracks, the corporal explains that he opted for the barracks due to the exorbitant rents that many landlords place on their properties.

He says, “This barracks is not too good for human habitation. But I think I have got no other choice than to move out of the civilian residential apartment as my landlord was not fair with the rent as he put it up at will.

“Although I can’t put a specific figure to the amount I pay monthly due to the newly introduced e-payment regime, the rent in the barracks can’t be more than N5,000, which is far less than how much I paid in my former place of residence.”

At the Surulere Barracks, a police sergeant attached to the Nigeria Police Force Headquarters Annexe in Obalende, who spoke on the condition of anonymity, notes that he hardly makes use of the toilet he shares with other residents of his block. He explains that due to the dilapidated state of the toilet, he always makes use of rest rooms of one of the banks opposite the barracks whenever he is pressed.

“I try as much as possible to empty my bowels at the office but whenever I am pressed at home, I rush down to the bank opposite the barracks and act as if I’m one of their customers with a view to passing out waste.

“This is the third barracks I have resided in. I once stayed in Sunrise Barracks in Olodi-Apapa area of Lagos as well as in Obalende Barracks and I can tell you that the barracks are also in very worrisome states,” he laments.

The police sergeant says he has refused to allow his family to stay with him in the barracks due to the level of deterioration adding that the environment is not good enough to raise his kids.

In spite of the cooperation among the policemen occupying the barracks, which led to the formation of a development association on block basis, the police sergeant notes that only little has been done to salvage the situation.

“During the rainy season, this whole place leading up to my apartment is always waterlogged and to add salt to injury, the human faeces in the broken sewage adds to the stagnant water around and pollutes the whole environment. This has been the trend for the three years I have been leaving here as no renovation has taken place. My children and wife stay in Ibadan where I got them a decent accommodation. To be realistic, it is not easy staying away from one’s family but this environment is not good enough. My children are still young and any of these structures around are hanging precariously and could fall on them,” he adds.