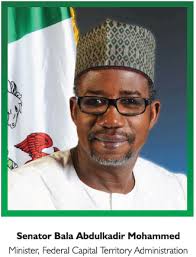 The FCT Minister, Sen. Bala Mohammed, on Monday in Abuja threatened to sack any mandate Secretary or Director who is not performing to the expectations of the government.

This is contained in a statement issued by Mr Muhammad Sule, the Chief Press Secretary to the FCT Minister.

The statement said that the minister read the riot act at an emergency meeting with the FCT Minister of State, Ms Olajumoke Akinjide, FCT Permanent Secretary, and some mandate secretaries.

The meeting also included Coordinator of Abuja Metropolitan Management Council (AMMC) and directors whose duties have direct bearing with municipal, social services and the day to day running of the FCTA.

It said that the minister gave a week ultimatum to see drastic changes in the areas of environment, particularly in garbage collection, social menace like street hawking and begging.

Accordingly, the minister called for enforcement of total ban on commercial motorcyclists (Okada) in designated areas in the city among others.

According to the statement, any political appointee or public servant who is not prepared to sit-up must be prepared to be sacked.

It said that Mohammed lamented a situation where ad-hoc committees were set up to handle jobs that were statutory in nature and attributed this to poor attitude to work.

“No staff either political appointee or public servant is indispensable as FCTA will soon embark on re-adjustment which is not intended to cause pain but to make the system work effectively.

“FCTA will not accept a situation where some secretaries and directors are attempting to create loyalty and dynasty in the system rather than carrying all staff along”, it said.

The minister advised all public servants in the FCTA to wake up to their responsibilities to achieve the Transformation Agenda of the Federal Government. (NAN)