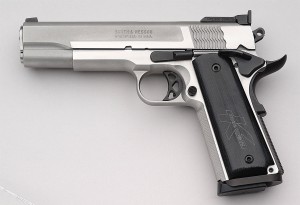 Tevin Kievelle Monroe apparently wanted to work at McDonald’s real bad. So much so that he demanded a job application at gunpoint.

Police in Norfolk, Va., arrested 31-year-old Monroe last week after he allegedly walked into a Mickey D’s and told the on-duty manager he wanted to apply for a job.

When the manager explained twice that all job applicants must fill out their forms online, Monroe allegedly lifted his shirt and showed the gun tucked in his waistband, WAVY.com reported.

The manager then asked the suspect to sit down while she found a paper application for him to fill out. While he was doing that, she called 911, according to Dumb As A Blog.

The suspect was still filling out the paperwork when police arrived, HamptonRoads.com reported.

Monroe was charged with brandishing a firearm, carrying a concealed weapon, and disorderly conduct, WKTR.com reported.

He probably wasn’t called back for a job interview.

The most recent incident of criminal job application occurred when police in Rehoboth Beach, Del., arrested Melissa Brittingham, 44, last Friday. She allegedly filled out an application at Five Guys, then took about $15 from two separate tip jars.