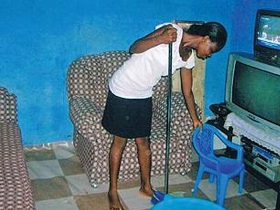 A housemaid, Chika Ukoha, has committed suicide in Kubwa, a satellite town in the Federal Capital Territory, Abuja, by swallowing a concentrated insecticide, popularly known as sniper.

The 17-year-old girl, who completed her secondary school education in 2012, was said to have taken the action following a verbal reprimand from her employer over some missing money.

Chika, who was described as a well-behaved girl, had been living with her employer for three years and was said to have passed her Senior Secondary Certificate Examination in flying colours before the tragedy.

A neighbour, Nwosu Oke, told PUNCH Metro on Monday that Chika’s employer, identified simply as Madam Oluchi, had spent a lot of money on the girl’s education and was planning to buy her a Unified Tertiary Matriculation Examination form to enable her go to the university before the incident.

On the fateful day, Oluchi was said to have accosted Chika over the missing money and had also threatened to cut her hair if she did not reveal where she kept it.

“Chika brought out part of the money which she hid inside the cushion chair. But her madam insisted that she must tell her what she did with the balance of the money. The girl said she gave it to somebody, but refused to disclose the name of the person, saying she would rather die than mention the person’s name,” Oke said.

According to him, Oluchi threatened to cut off Chika’s hair, but when the girl remained adamant, she (Oluchi) stepped out of the room to the back of the apartment. Chika, however, locked herself inside the apartment and swallowed the insecticide.

He said, “After reprimanding the girl for not disclosing the name of the person she gave the money to, Oluchi and her cousin, who was in Abuja for a job interview, continued talking at the back of the house. Later, they decided to check on Chika in the house. They found that she had locked the door. So they went to the front of the house and peeped through the window. They found her lying still on the bed.

“They raised the alarm, forced the net door open and rushed into the room. They also forced palm oil into her mouth in an attempt to mitigate the effect of the insecticide. A neighbour came and assisted them to take her to the General Hospital, Kubwa. She was still alive when she got to the hospital, but she later died.”

Another neighbour, who pleaded anonymity, said Chika was usually well behaved except for occasional exuberance associated with girls her of age.

It was gathered that Oluchi immediately reported the incident at the Divisional Police Station, Kubwa, where she was transferred to the FCT Police Command, where she had been detained.

The FCT Police Public Relations Officer, Altienne Daniel, confirmed the incident and said that investigation was ongoing. He added that Oluchi might be charged for murder if found culpable in the death of her housemaid.