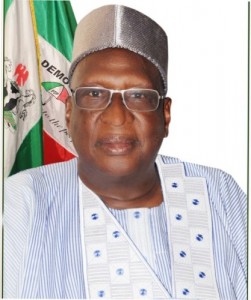 Contrary to the brave face he puts up in public, the embattled National Chairman of Peoples Democratic Party (PDP), Alhaji Bamanga Tukur will next week file a suit at the Abuja High Court to stop the party’s National Executive Committee (NEC) from removing him from office.

Tukur has often told anyone that bothers to listen that his position is not threatened by the current crisis rocking the party as he has not committed any offence to warrant his removal but it was learnt that he would file the suit specifically seeking to stop either PDP NEC or any other group or individual in the party from moving his leadership between Monday and Tuesday.

A meeting of PDP NEC is slated for January and some of the burning issues expected to dominate its discussion include the crisis rocking the party, the continued stay in office of Tukur and aspects of former President Olusegun Obasanjo’s letter to President Goodluck Jonathan.

A chieftain of the ruling party and a close confidant of Tukur, who is from Adamawa State, revealed that the PDP chairman’s decision to go to court is to stop those he called desperate individuals in the party from giving showing him the exit.

The PDP stalwart, who pleaded anonymity, stated that it was imminent that some prominent members of NEC may influence President Jonathan to move against the national chairman.

He said: “Our national chairman does not want to be caught napping, he knows that some members of NEC who do not mean well for PDP and the President but who are pretending to be loyalists of President Jonathan have mobilized NEC members to endorse his removal. He is going to court to stop these evil men who are desperate to achieve their evil plans. Lawyers to the national chairman have been briefed.  They are going to file a suit on Monday or Tuesday and hopefully the chairman will get a motion stopping NEC from taking funny decision”.

He spoke further: “It is a pity that some people are bent on removing the chairman.  It is also a pity that the President is not seeing through the glass to see the motive of those engineering this move. The whole plot is to remove the stumbling block and pave the way for their evil plans against the President”.

Asked to name the chieftains of the party, who he believes are bent on easing Tukur out, the PDP chieftain said: “We know them.  They are not more than few powerful members of the Board of Trustees (BoT), some governors and some elements in the presidency. In the last few months they have made life difficult for the national chairman.  They have starved him of funds. Tukur is the one running the party with his money. It is as bad as that”.

On whether the national chairman has the blessing of President Jonathan in the decision to seek legal protection, the source said: “I don’t think he needs the support of the President to exercise his right. The truth is that the President appears to be dancing with his traducers now and that is very unfortunate.

“I think, for now, it is only the First Lady that is seeing the danger that lies ahead and that is why she is fully backing the chairman. She knows that these people do not mean well for the President and our party.  She knows that they are working for APC”.

Some media reports had indicated that Dame Patience Jonathan had played a prominent role in getting the PDP Governors Forum, led by Godswill Akpabio of Akwa Ibom State to pass a vote of confidence on the leadership of Tukur after it emerged that they had agreed to inform the president to let the national chairman go in the interest of peace and stability in the ruling party.

This was confirmed by the source, who maintained the claim that some PDP governors and other leaders of the party had reached an agreement that the national chairman be replaced to pave the way for reconciliation with aggrieved members of the party, adding, “I know the President is now bowing to their lies and blackmails”.