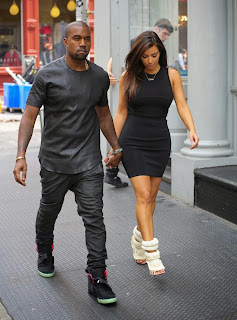 When will people leave this couple alone? Someone wants Kanye West to come out of his 6-month (dissing) “sabbatical”. It won’t work o.lol. The result of a Celebrity Neighbour survey conducted by Zillow; a real estate website America saw Kanye West and Kim Kardashian topping the list of worst neighbours of 2013.

“No one wants to live next door to a family who has cameras following them everywhere and seems to seek out as much attention as possible. However, with more than one-third of surveyed Americans preferring a non-celebrity neighbor, what remains clear is that many people don’t want to live next to any celebrity, regardless of why they are famous.” Zillow’s Chief Marketing Officer Amy Bohutinsky stated.