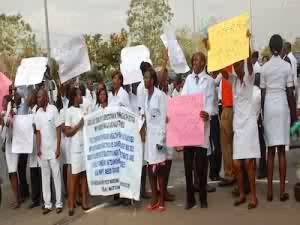 The health officials are demanding the implementation of a new pay structure.

The Zamfara State Government has announced the sack of over 400 nurses and midwives, who went on strike over pay, accusing them of leaving their duty posts without permission,
The Commissioner for Information, Ibrahim Birnin Magaji, announced the decision in a statement on Wednesday in Gusau.

The health workers had been on an indefinite strike since last Wednesday, over non-implementation of CONHESS by the state government.

Mr. Birnin Magaji dismissed the claim by the health workers, saying that the government had approved the implementation of the new salary effective from December1.

According to him, the decision to terminate the appointments is in line with Civil Service Rules.

“We therefore stand by it. As representatives of the people, we cannot fold our hands to allow such actions to continue; leaving our hospitals empty without workers.”

The commissioner explained that the termination order did not affect those who were on leave.

Reacting to the development, the state Chairman of Association of Nurses and Midwives, Bashir Mafara, described the state government’s pronouncement as “an empty threat”.

He said the workers would continue with the strike and take measures to protect their rights.

The state Civil Service Commission had a week ago commenced the recruitment of new nurses and midwives into the state service.

Government’s decision on the workers would affect health care services in the state which recently recorded 47 deaths from cholera outbreak.

Zamfara is one of the states led by the All Progressives Congress, APC, Nigeria’s largest opposition party.

Another APC state, Lagos, had also sacked striking health workers including doctors, but reversed its decision due to public pressure and condemnation.

The APC had condemned the federal government’s threat to sack university lecturers who failed to resume duties by December 9.