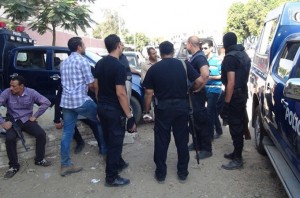 At least six people have been killed in clashes across Egypt as police dispersed thousands of protesters demanding deposed Islamist president Mohamed Morsi be reinstated.

The protests on Friday came after an Islamist alliance that backs Morsi called for demonstrations ahead of a new hearing on Wednesday in a trial against the ousted president.

Three people were killed in Cairo, and three others in the cities of Ismailiya, Fayoum and Alexandria, as the Islamist protesters fought with police and civilian opponents, said the health ministry.

At least 42 people were wounded in the violence, it said.

In the upscale neighbourhood of Maadi, police fired tear gas near a military hospital as protesters threw fireworks at them, an AFP reporter said.

He said protesters clashed with the police on a road along the Nile river and also inside the suburb.

The street was littered with rocks and burning wood as police vehicles sped up and down the road to disperse the protesters.

Protesters chanted “Down with military rule” and slogans against army chief Abdel Fattah al-Sissi, who led Morsi’s ouster in July.

Since the Islamist president’s ouster, his supporters have staged near-daily protests calling for his reinstatement, particularly after Friday prayers.

But their numbers have dwindled amid a violent government crackdown.

More than 1000 people, mostly Islamists, died in street clashes following his overthrow, and thousands have been imprisoned.

Friday’s protests come as a pro-Morsi Islamist coalition spearheading the protest movement called for demonstrations ahead of the resumption of his trial on Wednesday.

Morsi is being tried on charges of inciting the killings of protesters during his presidency.