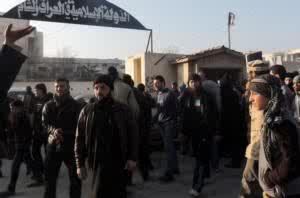 The Islamic State of Iraq and the Levant (ISIL) has executed media activists, relief workers and other civilians that were held captive by the al-Qaeda-linked group in Syria’s Aleppo, according to activists and a rebel fighter.

The prisoners, who were held in the ISIL detention centre in Qadi al-Askar district, were killed on Monday evening as clashes raged across Syria’s opposition-held areas between the ISIL and several other rebel groups.

According to activist group the Local Coordination Committees, at least 50 were killed.

The opposition Syrian Journalists Association, in a statement, said its member identified the bodies of four staff belonging to the Syrian TV channel Shada Al Horriya who were kidnapped by ISIL in December.

Fighters from Liwaa al-Tawheed, a strong opposition battalion in Aleppo, said they heard gunfire and then saw bodies of 20 executed men in the courtyard.

“The courtyard is shared by both the headquarters of Liwaa al-Tawheed and ISIL in Qadi al-Askar. We are ISIL’s neighbours there,” a member of Liwaa al-Tawhid told Al Jazeera.

Since Friday, a broad coalition of moderates and Islamists opposed to President Bashar al-Assad have been seeking to drive ISIL – which is accused of kidnapping, torturing and killing rival rebels and civilians – from its strongholds in the north and east of Syria.

The last three days of rebel-on-rebel clashes have killed more than 120 people, the UK-based Syrian Observatory for Human Rights said.

The ISIL, whose leadership is based in Iraq and is made up of mostly foreign fighters from across the world, was initially welcomed by other rebel groups in their fight against Assad. However, tensions mounted as ISIL was accused of imposing a reign of terror in areas where it operated.

On Monday, rebels in northeastern Raqqa province managed to free 50 Syrian prisoners held by the ISIL, who are believed to be holding hundreds of prisoners, including foreign journalists.

Raqqa is the only provincial capital lost by the regime since the Syrian conflict began in March 2011.

The city later fell into the hands of ISIL, which joined the fight against the regime in late spring 2013.

The Observatory said the main group besieging ISIL’s Raqa headquarters is Al-Nusra Front, which is also affiliated with Al-Qaeda but is seen as less hardline and has long competed with ISIL to represent the global terror network in Syria.

ISIL has struck back, including with a car bombing at a rebel checkpoint in Darkush, Idlib that killed an unknown number of fighters on Monday.

The rebel side also committed abuses, executing two ISIL fighters and burning one of their bodies in the Haydariyeh district of Aleppo, “in front of neighbourhood residents”, the Observatory said. [AlJazeera]