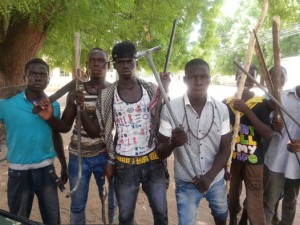 The Borno Youth Vigilante Association, popularly known as Civilian JTF, Thursay said the group was ready to go after political thugs and their sponsors in the same way they had been going after the Boko Haram sect, if they do not desist from breaching the peace in the state.

Maiduguri has in the last few days dealt with political violence, which resulted in the two major actors, the incumbent governor, Alhaji Kashim Shettima, and his predecessor, Senator Ali Modu Sheriff, being pelted with stones by suspected political thugs loyal to both politicians.

After the attack on the governors, a massive bomb was detonated on Tuesday in the centre of the town by a suicide bomber leading to the death of 43 persons with many others injured.

In a reaction to the recent spate of violence, the Civilian JTF yesterday called on political parties in the state to call their youth wings or thugs to order, insisting that they would not tolerate any person or group who wants to truncate the emerging peace being enjoyed in the state.

The group, which issued this warning at a press briefing in Maiduguri, equally called on the authorities to lift the curfew presently imposed on the state, so that their members could patrol the streets for 24 hours.

“Our youths should remember that this group of politicians do not care about our welfare or peaceful co-existence.”

He also called on the people of Maiduguri and its environs to continue to support the vigilante group in the task of assisting security agencies in protecting lives and property.

The legal adviser said the recent bomb blast, which breached the peace being enjoyed in the state, would not deter the youths from carrying out their responsibilities.

He maintained that the Civilian JTF was more determined and focused to continue to discharge its responsibilities even if it means laying down their lives for the total restoration of peace in the state.