Following continued violence in Central African Republic, the federal government has evacuated a total of 839 persons comprising Nigerians and citizens of neighbouring West African countries from Bangui, the capital of CAR.

One of the evacuees was lucky not to give birth to her babies amid the crisis in the country as she was delivered of a set of twins immediately on arrival in Abuja at about 4.30 pm Saturday.

Mrs. Kalthum Yusuf, who was in the second batch of the evacuation was aboard the chartered Arik aircraft, which conveyed the batch of evacuees from the war-torn country.

Yusuf, whose twins are boys, was said to have gone into serious labour immediately the plane took off from Bangui in the early hours of yesterday. 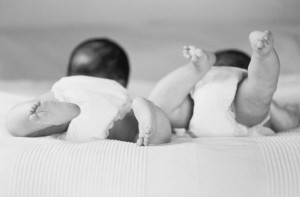 Newsmen were denied access to mother of the twins, as a Federal Airports Authority of Nigeria (FAAN) official said the Nigerian Airspace Management Authority (NAMA) health officials were attending to her and the babies at the General Aviation Terminal (GAT) clinic.

She was later relocated to the Air Force Hospital close to the airport.

Meanwhile, another batch of 474 persons were yesterday evacuated, after the FG commenced the evacuation from the troubled country on Friday, with the airlift of first batch of 365 persons.

The evacuation is expected to continue as the federal government was said to have dispatched three jumbo jets to Bangui to bring the remaining people back home.

The National Emergency Management Agency (NEMA), in collaboration with officials of the Foreign Affairs Ministry, had so far documented about 2,000 persons ready to be brought back through the Nnamdi Azikiwe Airport, Abuja, reports have said.

The NEMA Director of Planning, Research and Forecasting, Alhassan Nuhu, who represented the Director-General of the agency, said the evacuees would be temporarily accommodated at the Hajj Camp in the airport vicinity before all formalities are completed for their relocation to their various destinations.