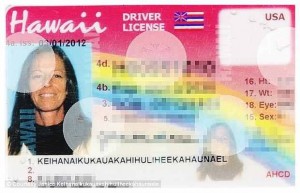 A Hawaiian woman says she has finally received a driver’s licence with her full last name — all 36 characters of it.

She said she started the campaign to have her correct name on her licence after a police officer stopped her, then questioned why her first name didn’t appear on the licence.

“I told him it is not my fault that my licence and state ID are not correct and I am trying to get it corrected,” she told the BBC in September.

“He then told me ‘Well, you can always change your name back to your maiden name.’ This hurt my heart.”

Keihanaikukauakahihulihe’ekahaunaele’s maiden name is Worth.

Hawaii’s transportation department has changed the system to handle last names of up to 40 characters.