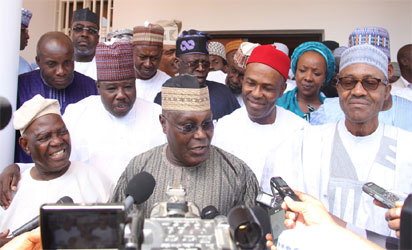 Former Vice President Atiku Abubakar said yesterday that he has begun a nationwide consultation process towards taking a definite position on the invitation extended to him by leaders of the All Progressives Congress to defect to the party.

The APC leaders, led by Interim National Chairman, Chief Bisi Akande had visited Atiku on December 18 at his Asokoro residence in Abuja, asking him to join the party; a request he asked for time to consult with his friends and political associates before making his decision known.

And it seems he has given serious thought to the APC leaders’ invitation as he said in a statement, which he personally signed in Abuja on Sunday that he had started consulting sometimes ago and would continue doing so for the next few weeks.

Atiku, who is still a member of the ruling Peoples Democratic Party, PDP, said in the statement, “As we begin a new year, our nation has to begin anew. As you are aware, I have been engaged in formal and informal meetings with Nigerians for a while. And for the next few weeks, I will be travelling across the country in continuation of the consultative process.

“I will continue to listen to the hopes and fears of our people, so that together, we can build a future that we all can be proud of.

“The times we are in call for hard work because Nigerians matter and our country matters, too.

“I believe that this consultative process will reinforce our shared values and throw up a new way forward for our dear country”.