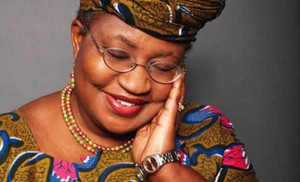 Minister of Finance and the Co-ordinating Minister for the Economy, Dr. Ngozi Okonjo-Iweala has said the 50 questions raised by members of the House of Representatives which they expect her to answer before the 2014 budget could be considered was like writing an examination.

Fielding questions from State House correspondents, shortly after she attended a presentation of a report on “14 Years of Strategic Partnership between the DFID, UK and the Debt Management Office – Nigeria” presided over by Vice President Namadi Sambo, Okonjo-Iweala said some of the issues raised were weighty, and as such, she needed some time to be able to tackle them.

The House of Representatives had threatened not to consider the 2014 budget until the minister provides answers to their 50 questions on the management of the economy.

“You know I am taking exams. They have given me exams and I am sitting it and at some point, we have to come out of the exams room. Some of the questions are very weighty and you know some of us will need a bit of time to be able to tackle them,” Okonjo-Iweala said.

She however noted that Nigeria had the best Debt Management Office in the whole of sub-sahara Africa.

She noted that yesterday’s meeting was a celebration of the end of the Technical Assistance of the United Kingdom to DMO, because the partners came to conclusion that DMO now has the wherewithal to stand on its feet without foreign assistance.

“I think it is a wonderful day because this is the first time a partner says that now an institution that they helped to build is mature and we don’t need anymore help. Instead, we are now being asked to help other African countries to establish debt management institutions because our DMO is being recommended by the British as one of the best debt management institutions in Africa. So, we are helping other countries now. I think it is a wonderful thing.

“Contrary to the idea that we are piling up debt, this administration, with the strong support of Mr. President, has embarked on a policy of trying to reduce the borrowing particularly the domestic borrowing. You know the major part of our debt is domestic. External debt is only two per cent of what we owe and 98 per cent domestic debt. So, we want to reduce that so that the private sector can have chance to borrow so that interest rate can come down.

“From 2011 till now, we have gone from about N852 billion in borrowing down to N571 billion. It is a very big reduction. So, I beg to differ from those who say we are piling up debt. We actually have very good strategy. In addition, for the first time ever, we actually retired N75 billion in bond last year, filled it up completely, ” she said.