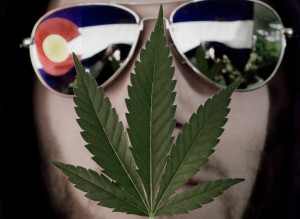 For more than 70 years, the sale of marijuana for recreational use has been criminally prohibited in the United States. But that ban, as it has existed for decades, ended Wednesday in Colorado.

“This is a big day,” said Tom Angell, chairman of drug reform group Marijuana Majority, to The Huffington Post. “With what Colorado is doing now, and what Washington state and Uruguay will do later this year, we’re finally getting a chance to show the world the benefits of legalizing and regulating marijuana that we’ve been talking about for so many years. Bringing the market above ground will generate tax revenue, create jobs and take money out of the hands of the violent drug cartels and gangs that control the trade where marijuana is illegal. Once other states and countries see these proven results, they’ll want to get rid of their prohibition laws too.”

According to the Marijuana Enforcement Division (MED), the agency that regulates the marijuana industry in the state, more than 300 marijuana businesses in Colorado have begun to receive their state and local licenses to operate legally, but only a few dozen retailers were able to complete the rigorous inspection and approval process in time to open their doors Jan. 1. Those shops will be open Wednesday, selling recreational marijuana for the first time; about 14 are in Denver. Dozens more pot shops are expected to open statewide in the coming weeks and months.

For the shops opening Wednesday, business is expected to boom. Some owners are concerned about supply. “I’m going to run out of cannabis; it’s just a matter of when,” said Toni Fox, owner of 3D Cannabis Center in Denver.

To prevent possible shortages, Colorado dispensaries have been preparing for the New Year’s rush. Andy Williams, proprietor of Denver’s Medicine Man, told HuffPost that he raised his prices months ago, and made larger-than-normal purchases of marijuana alternatives, like edibles. He doesn’t think he’ll run out, but says some other shops will.

In November, Colorado voters also approved a 25 percent tax on all recreational-marijuana sales. The taxes are expected to generate roughly $70 million in additional revenue for the state in 2014.

Pabon also noted that the law is only as good as its enforcement, and that it will truly be tested in the months following Jan. 1.

“I have seen the devastation of the progression of marijuana to harsher drugs like crack cocaine,” Hancock said. “And a lot of the folks that have dealt with substance abuse — particularly with cocaine and crack cocaine — they started with marijuana.”

Before voters approved Amendment 64, which legalized marijuana, in 2012, Colorado Gov. John Hickenlooper (D) also voiced opposition to the pot measure, saying, “Colorado is known for many great things –- marijuana should not be one of them.” Hickenlooper cited concerns that legal marijuana could lead to an increase in underage use.

However, by the time he signed the law in May 2013, Hickenlooper called it “common sense” and went on to urge federal banking officials to make regulations more flexible for Colorado’s marijuana businesses. Marijuana businesses cannot legally obtain normal business banking services due to the federal government’s continued ban of the drug.

The Denver Post first reported that neither Hancock nor Hickenlooper would attend the first sales of legal weed on New Year’s Day.

Concerns still remain about whether or not recreational marijuana’s legalization will increase crime and instances of driving under the influence, and if legitimizing a drug with deep ties to a black market can drive the criminal element completely out.

“We’re cautiously optimistic, you never know what can pop up,” said Julie Postlethwait, spokesperson for the MED. “Retail, recreational marijuana is basically a black-market industry, so there’s a lot of things that we will learn in the next couple years — but if issues arise, we’ll talk about it and figure out how to do it better going forward.”

On Tuesday, the Denver mayor’s office sounded optimistic about the future of marijuana in the city. “Denver is a vibrant, growing city where people come to make a life, build a career and raise a family,” said Ashley Kilroy, executive director of marijuana policy for Hancock. “Medical marijuana has not changed that, and we don’t expect retail marijuana will either.”

For residents and tourists in Denver, the city government recently launched aneducational website on the new laws. Some key rules:

With Washington’s dispensaries expected to open in the coming months, a slew of other states considering legalizing marijuana as soon as this year, and popular support for legalization in the U.S. at an all-time high, legal pot appears poised for tremendous growth. One recent study suggests that the marijuana market is growing so fast, it could outpace the expansion of the global smartphone market.

“As a nation, we look back at alcohol prohibition and ask how we could have been so foolish,” said Mason Tvert, communications director for Marijuana Policy Project, to HuffPost. “It’s time to look forward and put the equally foolish policy of marijuana prohibition behind us.”