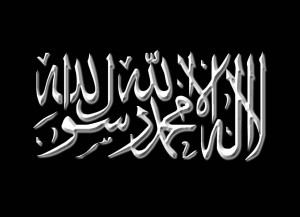 People of Ibadan and environs trooped to the community Grammar School, Amuloko, in the Ona Ara Local Government area of Ibadan where the mysterious inscription on the bark of a tree was seen.

The inscription, which was noticed around 1pm on Friday by a JSS 1 student, Abdulsalam Selimot, drew the attention of many people from the community and beyond, such that many turned the tree to an object of worship, as some made their requests known.

The Quranic lettering, which an Agriculture teacher in the Amuloko School, Mr. Atanda Abdulrauf Olayiwola, interpreted to mean “Mohammadu Ra Sululah” first appeared faintly before it got bolder few hours later to the consternation of many people.

Speaking with Selimot in her mother’s rented apartment at Oloya area of Amuloko, she said, “My Dad said he was coming to see me and so I stood under the tree in front of our school. Suddenly, a leaf fell on my head and when I picked it, I saw certain writing on it. I looked up to see where it came from and discovered it fell from the tree. There and then I saw an Arabic lettering appearing, being written on the tree.

“I could not read it well but I noticed that it was a Quranic Language similar to the spellings we were being taught at our Quranic centre. I then went to inform some Alfas who came for GNLD training close by. They saw it and asked for my name. They asked me to go and call my parents, and I went to call my mother,” she recollected.

According to her, the Alfas then started rubbing their palms on the part of the tree and shouting the name of Allah with praise, just as many other people were gathering to do same.

The news brought many more people to the area, who were seen capturing the moment on camera, while some cut leaves and branches off the tree, and others rubbed sachets of water on the inscription.

Two other similar trees in the premises also bore some Arabic writings on their barks, but Selimot said, “those other ones were the handiwork of some boys who were using nail to inscribe similar lettering on the trees because they heard that some people said they would send me to Saudi Arabia because of what I discovered”.

The student expressed bewilderment at her discovery, but faulted the news by a woman in veil, who claimed that the tree shouted ‘Allau Akbar’ when it was first sighted, saying “I didn’t hear any voice from the tree. It was the leaf which fell on my head that prompted me to look up and I saw the tiny writing”.