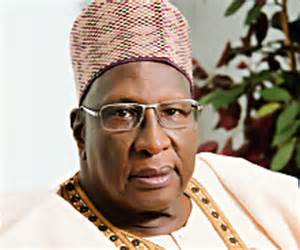 Embattled national Chairman of the Peoples Democratic Party, PDP, Alhaji Bamanga Tukur, has finally thrown in the towel as he has officially tendered his resignation letter, according to reports.

This came following a report that President Goodluck Jonathan had asked Tukur to honourably turn in his resignation letter before the party’s National Executive Committee (NEC) meeting slated for Thursday this week.

LEADERSHIP quoted an anonymous source from the presidency as saying in confidence that President Jonathan held another stormy session with Tukur on Saturday to ascertain most of the allegations levelled against him by some members of the PDP National Working Committee (NWC) at the meeting they had with the president on Thursday at the presidential villa.

The source said immediately after the president’s arrival from the ECOWAS Summit in Abidjan, Ivory Coast, Tukur was summoned to the villa to brief the president with records of meetings of the NWC and venues that such meetings took place.

One of the allegations against Tukur is that he holds NWC meetings at his Wuse 2 residence instead of the party’s Wadata Plaza headquarters, Leadership reports.

“It is wrong for people to always think Mr President is shielding the national chairman of the party from wrongdoings; it is absolutely untrue that the president insists on Tukur’s stay as chairman.

“Some of you might not know that each time there are problems or calls for his removal, the same NWC members would come to the villa and say there is peace and that all is well.

“But in this case, as you have all seen, the chicken has come home to roost, as the same NWC members have opened up on the man that he is the problem we need to deal with; other critical stakeholders are of the same view and even very powerful elders and members of the BoT have secretly sent in submissions that Tukur is not helping both himself and the party; no governor except one is speaking or pleading for him.

“So when he came yesterday (on Saturday) to the villa, it was a very serious case because, for the first time, the president has told Tukur he won’t plead for him, and if he knows he does not have the majority members of the PDP NEC on his side, he should just go and resign before the NEC on Thursday.

“I can tell you the president will not defend or plead with any NEC member to save Tukur because whatever the NEC says on him will be his fate; the president cannot continue to solve national problems and, at the same time, be carrying the burden of the party chairman who ordinarily should be of help to him,” the source said.

Tukur’s resignation has saved him the embarrassment of being suspended from the party by members of the NWC, as there were said to be plans by the National Working Committee and the National Executive Committee to suspend the embattled Chairman.

Reports have it that the First Lady, Dame Patience Jonathan is already making moves to have the Minister of Transport, Sen. Idris Umar appointed as the new party Chairman.