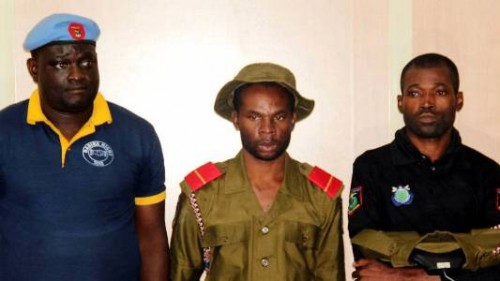 Mba said that Abraham, the leader of the syndicate, claimed that URRSF belonged to the Economic and Social Council of the UN.

He said: “The police have smashed a fake recruitment syndicate known as Universal Response and Rescue Support Foundation (URRSF) purported to belong to the Economic and Social Council of the United Nations (UN).

“This organization, which has an illegal training camp in Lagos with branches in Ekiti, Cross River and Imo States as well as Abuja, and claims to be in charge of recruitment for the UN, has exploited the gullibility of the Nigerian youths.

“So far, an estimated N7, 000,000 has been extorted from their various victims. The website being used by the syndicate is www.universalrescuecorps.com”, the force spokesman said.

Mba added that the arrested suspects would soon be charged for criminal conspiracy, impersonation, cheating and forgery.

Items recovered from the suspects according to include “181 copies of unfilled recruitment forms with the UN logo, 20 photograph copies of URRSF members in paramilitary uniforms, a booklet containing lists of recruitment and phone numbers of intending members of URRSF, one Toyota Sequenda Jeep with registration number BG 151 AA and other incriminating items”.

However, fielding questions from journalists, the alleged leader of the syndicate, Michael Abraham said he thought he was supporting the work of the world body in the area of attaining the Millenium Development Goals, MDGs and apologized for causing embarrassment to the UN.

“I felt that we are supporting the work of the UN in the place of Millennium Development Goals”, he said.

“I never knew this will cause the UN all this embarrassment.

“Sincerely speaking, I am very sorry and I want to apologise to UN, I am sorry, it was not criminally intended, we just want to serve humanity and that is just all”, Abraham said.