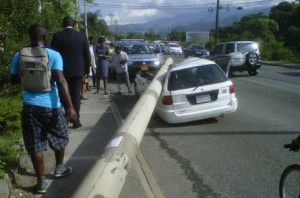 Eleanor Coopsammy was driving on the Perimeter Highway in Winnipeg, Manitoba, Canada, to pick up her son from curling when she found herself in a startling and dangerous situation. As reported by CTV, out of nowhere a huge steel light pole fell and slammed across Coopsammy’s windshield.

“I was obviously in shock and completely scared,” said Coopsammy, a CTV reporter. “The windshield was completely gone and I just remember thinking, ‘Who’s going to pick up my son and is my baby okay?’”

The reporter was seven-months pregnant and was miraculously able to pull over on the side of the highway. Her baby was fine and the expectant mother escaped with only minor cuts.

Will Dudgeon was driving in the opposite direction on the highway and witnessed the accident. He said that he was behind a semi carrying a snow grader on a flatbed. Dudgeon said, “He got a little too close to the median and the blade hit this pole.” He added, “There was really no way to predict it, like to even see that it would happen.”

Coopsammy was able to chuckle and be grateful for the outcome of the serious situation saying, “I can’t believe I’m not decapitated and dead right now. It’s a miracle, really.”