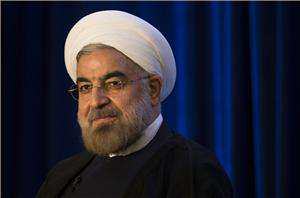 Iranian President Hassan Rouhani has raised hope of an end to over three decades of enmity with the United States, as he stated they could become friends if both sides made an effort.

He said this while speaking in a Swiss television interview  on Wednesday after arriving at the World Economic Forum in Davos where he will court the global business community and meet a series of oil company executives on Thursday.

Asked whether there could one day be a US embassy again in Tehran instead of the Swiss embassy representing US interests in Iran, the president told public RTS television:

An interim deal with six major powers including the United States to restrict Iran’s disputed nuclear programme in exchange for a partial easing of economic sanctions entered into force this week.

Rouhani travelled to Davos to persuade foreign investors to return to his country, which has some of the world’s biggest oil and gas resources and a market of 76 million people.

In the interview, in which he spoke in Farsi voiced over into French, he said relations with Washington had been difficult in the past but with hard work and efforts by both sides, problems could be overcome.

“This effort is necessary to create confidence on both sides. Iran is in fact stretching out its hand in peace and friendship to all countries of the world and wants friendly, good relations with all countries in the world,” the president said.

Rouhani will give a short speech on Thursday to chief executives from oil majors such as Eni, BP, Total and Shell, according to several executives who met in Davos.

Heads of US companies such as Exxon Mobil could also attend, the executives said.

Tehran wants Western oil companies to revive its giant ageing oilfields and develop new oil and gas fields once
sanctions are lifted and is improving its oil investment contract in order to lure them in.

Encouraged by the preliminary nuclear deal struck between Iran and Western powers in November, Tehran and Big Oil have wasted no time making contact, in the hope of a full lifting of sanctions.