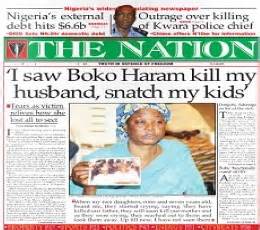 An Assistant Sales Representative of The Nation Newspapers in Ibadan, Oyo State, Timothy Adeosun, was yesterday killed in an accident, shortly after attending a New Year’s Eve service in church.

His counterpart with Thisday Newspapers, Juwon Babalola, who was with him at the time of the accident also sustained serious injuries.

The 23-year-old’s body had since been deposited at the morgue of the University College Hospital (UCH), Ibadan, as Babalola remain in critical condition at the Accident and Emergency Ward of the UCH where he is presently receiving treatment.

Adeosun was said to be returning with his friend, Babalola, to their Mokola residence from Oke-Padre Salvation Army Church Road when the incident occurred around 1:25a.m.

Confirming the incident, Divisional Transport Officer at Mokola Police station, Oyelowo Asimiyu said the driver of the car was currently in their custody.

According to him, investigation shows that the driver of the Acura car left his lane and went to the other lane where the deceased and his friend were pushed into a ditch, thus making Adeosun to die shortly after, due to the level of injuries he sustained while Babalola who also sustained serious injuries in his right thigh, chest and fractures in the legs was later admitted to a hospital for treatment.

Speaking on the development, the Chairman, Newspapers Distributors Association of Nigeria (NDAN), Mr. Babatunde Abimbola said he was called around 1:30a.m. that Adeosun had an accident and that it was a fatal one.

“Surprisingly, sympathisers offered to take him to a nearby hospital but he was rejected. Not only that, the boy with Babalola was writhing in pains as about seven hospitals rejected them including the UCH, Oluyoro Catholic Hospital, State Hospital at Adeoyo, until they were eventually admitted at A&E of UCH, Ibadan after much pleas.

Abimbola said over 30 agents and vendors who stormed the Oke Padre distribution centre turned down the newspapers on hearing of the sad occurence.

Speaking on behalf of The Nation, the newspaper’s Correspondent in Ibadan, Bisi Oladele, described the incident as tragic, particularly coming on New Year day.

Oladele prayed God to give the deceased’s parents the fortitude to bear the loss.

He described Adeosun as a hard-working, dedicated and promising young man who became a victim of a careless and lawless driver.

Oladele therefore called on the police to thoroughly investigate the incident and bring justice to the family of the deceased.

“Our thoughts are with the Adeosuns at this critical time. Clearly, they raised a responsible, reliable, meek and a promising man. His contributions to the company would be remembered always,” Oladele said.