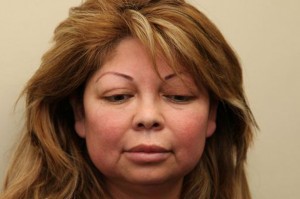 A beauty therapist who carried out “Vampire Facelifts” is being held in an American jail over the death of a woman she was treating.

Licensed Sandra Perez Gonzalez, 46, was arrested after customer Hamilet Suarez had a heart attack in her treatment salon and massage parlour in California’s Long Beach.

Paramedics tried to revive 36-year-old Hamilet but she failed to respond to CPR.

Detectives discovered medical equipment and multiple phials of controlled substances which Gonzalez was not licensed to administer in the treatment room she rented in the Areli’s Beauty Salon on Pacific Avenue.

Long Beach police are also trying to track down other customer’s treated by Gonzalez.