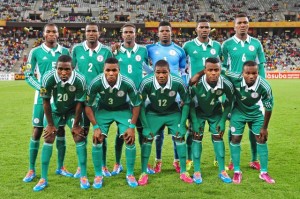 President Jonathan will give out monetary reward to players and coaches of the Super Eagles team B who recently impressed at the CAF African Nations Championship in South Africa on their debut.

The team to be hosted by the president on Thursday made the country proud in South Africa, with a Vanguard source close to the sports minister, Bolaji Abudulahi stating that the Eagles’ remarkable comeback against Morocco in a quarter-final match at the tournament thrilled the President.

Although President Jonathan has not declared the amount he will give to the players, it was learnt that the players will get N1m each, the assistant coaches N1.5m, while head coach Stephen Keshi will get N2m.

The president who has never hidden his admiration of the feat of the country’s football teams, during a church service stated that Nigeria like the Super Eagles will bounce back from the doldrums to be a great country again.

The home-based Eagles were 3-0 down to Morocco, but they came back at the break to level up and win the game at 4-3. They however failed to progress against Ghana in the semi-final whre they lost on penalties.

They however won the bronze after a hard fought battle against Zimbabwe in the third-place match.