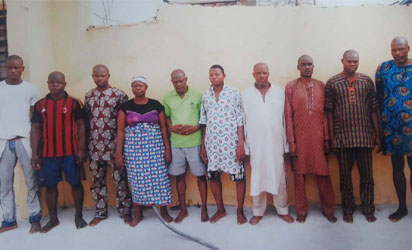 The police have arrested 12 suspects and declared four others wanted in connection with the torture of a woman and her two daughters.

Notice of the arrest is contained in a statement issued by CSP Frank Mba, the Force Public Relations Officer in Abuja on Tuesday.

It would be recalled that three women were tortured at the Oba Morufu International Market, Ejigbo in Lagos in February 2013 over alleged stealing.

Mba gave the supects’ names as Isiaka Waidi (the Baba-Oja of the market), the mastermind of the act, Haruna Abdullahi and Buhari Yusuf.

Mba said it was Buhari Yusuf who mixed a concoction of pepper and spirit, which was applied on the body of the victims, including their private parts.

“Tiri was captured in a video footage which showed him stripping one of the victims, Ajoke Agoma, mother of the two other female victims, in the presence of her husband”.

He said some of the suspects claimed to be members of the Oodua People’s Congress (OPC), while others said they were officials of the market association.

He added that “two of the victims, who are young girls, were arrested along with their mother, tortured and dehumanised by persons who claimed to be members of OPC providing security at the market”.

Mba said the suspects extorted N50, 000 from the father of the two girls as ransom to free them.

“One of the victims, Juliana Agoma, a national of Republic of Benin, was moved back to Cotonou by her father, where she subsequently died from alleged injuries she sustained in the torture”.

The force public relations officer recalled that the Inspector-General of Police, Mr Mohammed Abubakar, had ordered the Federal Special Anti-Robbery Squad, Lagos Annex, to take over the investigation of the matter from the Lagos Police Command.

He said the order was to ensure speedy delivery of justice in the case.

The investigation, he said, led to the arrest of the suspects.

Mba said that the I-G had commended the efforts of the various groups for their assistance during the investigation.

groups include human rights, civil society organisations and women support groups, as well as the Office of the Public Defender, Lagos State Ministry of Justice. (NAN)