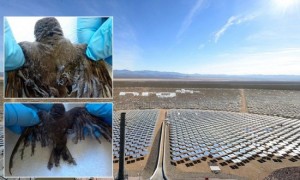 Environmentalists might swear by solar energy, but it turns out that the alternative source has its pitfalls too. Ivanpah, a giant solar farm in California’s Mohave Desert, is actually producing such high levels of heat that birds flying over it are burning to death.

The Ivanpah Solar Electric Generating System that opened last Thursday is a joint effort by NRG Energy Inc., Google Inc. and BrightSource Energy. It can produce electricity that is sufficient to power 140,000 homes. The project is supposed to be the beginning for the United States’ emerging solar industry. It uses a technology that is different and more expensive to build than a similar-sized conventional solar power plant.

The Ivanpah site is located 45 miles southwest of Las Vegas, with virtually unbroken sunshine for most part of the year. It is also close to transmission lines that carry power to consumers. The project makes use of technology called solar-thermal – more than 300,000 computer-controlled mirrors (each roughly the size of a garage door) reflect sunlight to boilers on top of 450-foot towers. The sun’s power heats the water in the boilers’ tubes and the steam drives turbines to create electricity.

Unfortunately, Ivanpah is now being dubbed the ‘$2.2 Billion Bird-Scorching Solar Project’ by various environmental groups. The mirrors actually appears to be scorching birds that fly through the intense heat surrounding the towers, which can reach 1,000 degrees Fahrenheit.

Compliance documents released by BrightSource Energy last year indicated that dozens of dead birds were found at the plant over the past several months, during the testing phase. Federal biologists have noticed that these birds appeared to have singed or burnt feathers. The dead birds included two hawks, four nighthawks, a grebe, a peregrine falcon and several sparrows.

Regulators at the plant said they anticipated that some birds would be killed once the plant started operating. But they certainly didn’t expect for so many to die during construction and testing. Jeff Holland, a spokesperson for NRG, said: “With the data we’ve gathered, it’s far too early in the process to draw any definitive conclusions about long-term impacts on avian or other species.”

According to Joe Desmond, a spokesperson for BrightSource, they have “the confidence in the technology and its ability to operate and perform as expected.” He said that the company will be able to resolve the problem of bird deaths and build more big plants in California and elsewhere.

Currently, state and federal regulators are conducting a two-year study of Ivanpah’s effects on birds. Environmental groups are actually questioning the value of cleaner power when native wildlife is being injured or killed. When BrightSource submitted the blueprint for its second big solar farm in Riverside County near Joshua Tree National Park, the US Fish and Wildlife Service objected. They told state regulators about their concerns that heat produced by the plant could kill golden eagles and other protected species.

“When you have new technologies, you don’t know what the impacts are going to be,” said Eric Davis, assistant regional director for migratory birds at the federal agency’s Sacramento office. “We’re trying to figure out how big the problem is and what we can do to minimize bird mortalities.”

The agency is also conducting a thorough investigation over the death of the birds. They suspect that it might be because of the birds colliding head-on with the structures. According to biologists, some birds may have mistaken the vast shimmering solar arrays for a lake.

For now, Ivanpah is both a success story and a cautionary tale. It brings to light the fact that there are certain inevitable trade-offs in the need for cleaner power. According to the California Energy Commission, the solar plant will impose ‘significant impacts on the environment, but the benefits the project will provide override those impacts.’