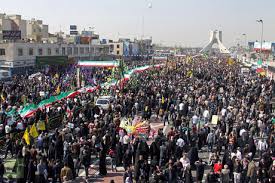 Thousands gather in streets of Tehran to mark day that created Islamic Republic, ending the reign of US-allied shah.

Hundreds of thousands of people gathered on the streets of the Iranian capital and cities around the country to mark the 35th anniversary of the Islamic Revolution.

In Tehran, huge crowds thronged central Azadi square on Tuesday for a speech by President Hassan Rouhani, his first major address to the public since his election in August.

Rouhani launched into the traditional anti-US rhetoric despite a significant political shift in Tehran, which resulted in his election last year as a leader pursuing a policy of outreach to the West.

“The people’s vote had no role in running this country. This was a huge humiliation,” Rouhani said, referring to the period when Iran was a constitutional monarchy.

“People wanted their views to be an influence [but] the big powers were interfering in the internal affairs of this country … The Americans thought the country of Iran belongs to them. They interfered everywhere even on security issues.”

The revolution was set in motion in 1979 after a siege began some 10 months following the fall of the US-allied shah.

Radical students stormed the US embassy, taking 52 people hostage. They were released after 444 days, and the seige ended Washington’s diplomatic relations with Tehran.

More recently, Iran reached an interim agreement with Western powers to curb its nuclear programme, which the West suspects is meant to develop a nuclear bomb.

Activities to mark the anniversary come a day after Iran “successfully tested” two missiles, according to the official IRNA news agency.

Iran’s ballistic missile programme has long been a source of concern for Western nations because it is capable of striking its arch-enemy Israel.

“The new generation of ballistic missile with a fragmentation warhead, and a Bina laser-guided surface-to-surface and air-to-surface missile, have been successfully tested,” Hossein Dehgan, the defence minister, said.

He said the new ballistic missile could “evade anti-missile systems” and was capable of “great destruction”.