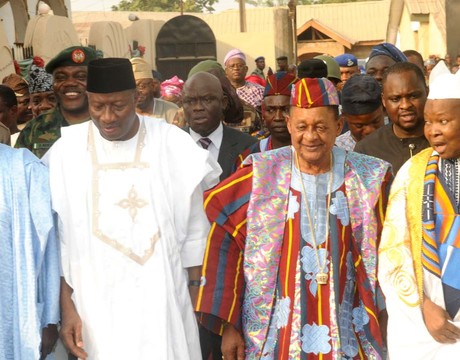 The visit on Saturday by President Goodluck Jonathan to the Alaafin of Oyo, Oba Lamidi Adeyemi has been faulted by the Olubadan-in-Council, which described the visit as selective and a contravention of the protocol of the existing chieftaincy law of Oyo State.

President Jonathan had after a meeting with the Ooni of Ife, Oba Okunwade Sijuade weekend, took a Nigerian Navy helicopter to Oyo town, where he also held a meeting with the Alaafin before he preceded to the Cargo Airport in Ibadan where his presidential aircraft was parked and jetted out of the ancient city.

However, in reaction to the president’s visit after the council’s meeting on Monday at the Olubadan’s palace, the Olubadan-in-Council in a statement Wednesday said while it was delighted to welcome Jonathan to Ibadan, it noted that it was a breach of protocol for him to have visited the city without paying a courtesy call on the Olubadan.

The council also condemned the state Governor, Senator Abiola Ajimobi for the role he played in the president’s visit to the state, blaming him for excluding from Mr. Jonathan’s itinerary, a visit to the Olubadan’s palace.

“The implication of the governor’s action is that he still recognises the Alaafin of Oyo as the Permanent Chairman of the Oyo State Council of Obas and Chiefs contrary to the existing chieftaincy law as amended in 2011, which makes the chairmanship rotational”, the statement read in part.

The council said the Olubadan would be sending a strong message to Jonathan and Ajimobi to desist from misleading acts capable of undermining the peace of the state and bringing Ibadan chieftaincy institution into disrepute.