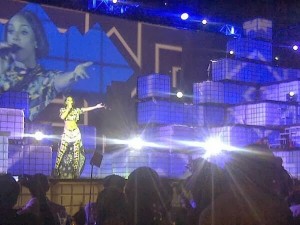 The highly anticipated Darey, Love Like A Movie Concert was yesterday and we all know that American singer — Kelly Rowland flew into the country as the VIP guest this year.

Fans were shocked when an upset Kelly Rowland walked off the stage after 5 minutes of performing because of a technical hitch during her performance; but she eventually came back up on stage several minutes after.

Apparently, Kelly Rowland had a change of heart as she returned on stage and delivered a sensational performance.