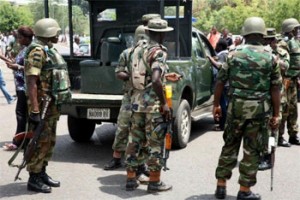 The newly appointed Chief of Army Staff, Lt Gen. Kenneth Minimah, has paid a two-day working visit to the three Northeastern of Borno, Yobe and Adamawa, currently under emergency rule to boost the morale of troops engaged in counter insurgency operations.

Minimah was accompanied on the tour by the Chief of Air Staff, Air Marshal Adekunle Amosu, who was also recently appointed.

The two military chiefs visited the various locational bases of the 7 Division, which is headquarters of the counter insurgency operation.

A statement issued on Thursday by the Director of Army Public Relations, Brig- General Olajide Laleye, quoted the Army Chief to have charged the troops to maintain discipline and remain resolute in the face of the daunting security challenges.

“Gen. Minimah reminded the troops of their responsibility as soldiers, noting that as professional soldiers, they must rise to the defence of their fatherland and not yield any ground to the forces of evil under any circumstances.

“He noted that the present security challenges facing the nation are not insurmountable if troops are well led and remain vigilant while carrying out assigned duties.

“He commended the troops for their hard work and dedication to duty and promised that their welfare would remain his top priority, urging them to imbibe good maintenance culture to ensure the continued serviceability of their equipment”, the statement added.

Minimah, who was visiting the troops for the first time since he assumed office as Chief of Army Staff last month, charged the soldiers, particularly those in border units, to ensure that arms and ammunition were not smuggled through their areas of responsibility.