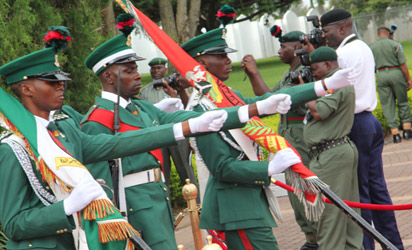 The Nigerian Army on Wednesday in Abuja announced the redeployment of 107 senior officers, including 36 Major-Generals and 61 others.

The Director, Army Public Relations, Brigadier Gen. Olajide Laleye, who announced the postings while addressing journalists on developments in the army, stated that some of the officers affected in the exercise included six new General Officers Commanding, GOC.

Mr. Laleye said that Maj.-Gen. Unsaid Bindawa is to remain at 7 Division, Maiduguri, while Maj.-Gen. P.A.T. Akem was appointed as the Army Provost Marshal.

Other postings included Maj.-Gen. G.A. Wahab who was appointed as the Chief of Administration, Army (COA), while Maj.-Gen A.T. Jubrin is now the Chief of Army Standard and Evaluation.

“Posting in the army is a routine activity that is carried out from time to time to fill existing vacancies emanating from promotions and retirements.

“Furthermore, the Nigerian Army wish to inform the media in particular and the public in general that posting and deployment of senior officers should not be used to overheat the polity.

“Insinuations and mischievous interpretation of a purely professional, unbiased and thoroughly thought out process should not be trivialised by undue and unfounded speculations,” Mr. Laleye said.