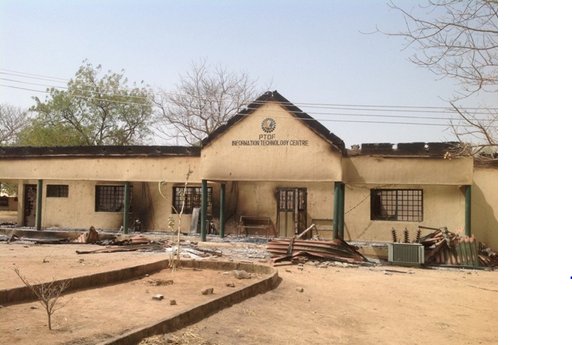 The set the students’ dormitories on fire and slit the throats of those who tried to escape.

“Some of the students bodies were burned to ashes,” said police commissioner Sanusi Rufai, adding 24 staff quarters, including the administrative block of the college and students’ hostel, were razed by the fire.

Meanwhile, death toll from the school massacre by Boko Haram gunmen has risen to 43. According to a senior medical source at the Sani Abacha Specialist Hospital in Damaturu, Yobe State, so far the ambulances have brought 43 bodies to the morgue.

The story continues below

A section of the school burnt down

Military spokesman in Yobe State Eli Lazarus disclosed that at around 2 a.m., suspected Boko Haram insurgents attacked a students’ hostel at the Federal Government College, a school for students aged 11 to 18 in the town of Buni Yadi.

It was gathered that the assailants arrived in 6 Toyota Hilux pickup trucks and motorcycles.

Adamu Garba, who teaches at a secondary school attached to the college, said the attackers first set ablaze the college administrative block, then moved to the hostels, locking the students in before starting fire. Garba says those who tried to escape out of the windows had their throats slit by the terrorists. Those who remained inside were burnt alive.

The military has already been dispatched to the area.

The governor visited the deserted remains of Federal Government College at Buni Yadi, a secondary school, and was told the soldiers withdrew Monday.

The latest attack is the fourth recorded on schools in Yobe State. GSS Damaturu, GSS Mamudo and College of Agriculture, Gujba were attacked last year.

Yobe, together with Borno and Adamawa States, has been under emergency rule since May 2013 to help the military to curb the Boko Haram activities.

Help us update this news, send in your photographs and reports by pressing the link below and filling out all necessary boxes. Please, provide your e-mail address so we could contact you.