The crisis rocking Rivers State took a new dimension on Friday when the supervising Minister of Education, Chief Nyesom Wike, said that the State Governor, Mr. Rotimi Amaechi, would be arrested after the declaration of Dr. Goodluck Jonathan as President in 2015. 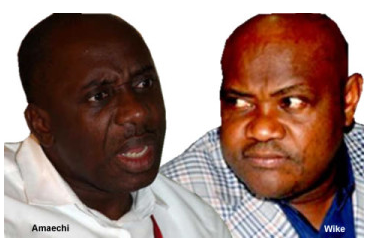 Wike explained that the Port Harcourt International Airport would be shut, including land and sea borders in the state to prevent the governor from escaping.

The minister spoke in Port Harcourt at the inauguration and handing over of 25 buses to the 23 local government chapters of the Peoples Democratic Party in the state.

Making reference to the approval given by the State House of Assembly for the governor to withdraw the sum of N30bn from the State Reserve Fund, Wike added that Amaechi and his cohorts would account for the state fund they have been spending.

“They can sit in Government House and approve whatever amount of money they like for Governor Amaechi to spend. But let me tell you all now, Governor Amaechi and his friends will account for all the monies that they are appropriating and spending now.”

“Once the Independent National Electoral Commission announces the victory of President Jonathan, we will immediately shut down the Port Harcourt International Airport and all land and sea borders in Rivers State to prevent Governor Amaechi from escaping.

“Does he (Amaechi) think we don’t know that he is planning to run away? But he and his cohorts will not succeed. All they can do thereafter is to lock themselves inside the Government House and at the appropriate time, we will go there and pick them up one after the other.

“Believe me; Governor Amaechi will surely account for all our monies that he is frittering away now. We will not allow the looters of our treasury to run away from justice,” the minister said.

Wike, however, noted that no amount of humiliation from the governor or his agents would stop the PDP from winning the 2015 general election in Rivers State.

On Amaechi’s claim that Wike swore with the names of his (Wike) children that he would not betray him (Amaechi) if the governor nominated him for ministerial appointment, Wike said Amaechi was afraid of everybody.

In his remark, the Deputy National Chairman of the PDP, Prince Uche Secondus, described the governor as a temporary occupant of the Government House and added that the PDP would not allow him to choose his successor in 2015.

According to Secondus, “Rivers State is PDP and Governor Amaechi cannot go against the wishes of the people. He has taken all our money to Lagos to develop the All Progressives Congress.”