83 civilians who had lived under Syrian government siege in the devastated city of Homs for a year and a half have been evacuated, the first concrete result of talks launched two weeks ago to try to end the country’s civil war.

Buses ferried dozens of weary-looking evacuees, accompanied by the Syrian Arab Red Crescent, to a meeting point outside Homs where aid workers, soldiers and police were gathered. The World Food Programme said many appeared malnourished.

“They were living on leaves and grass and olives and whatever they could find,” WFP spokeswoman Elisabeth Byrs said.

Footage broadcast on state television and other networks showed elderly and apparently frail men wrapped in blankets being helped into a bus by Red Crescent volunteers.

A UN convoy arrived on Friday after an uneasy ceasefire came into effect after the implementation of a truce discussed at peace talks in Switzerland last week. An expected delivery of humanitarian aid and food has been delayed until Saturday.

Speaking to Syrian state television, Homs governor Talal al-Barazi said the atmosphere was “positive” ahead of the operation which began around midday.

The besieged city remained largely quiet later on Friday, adding to hopes the truce would continue long enough for the initial evacuation to be completed, but there were reports of a shooting. 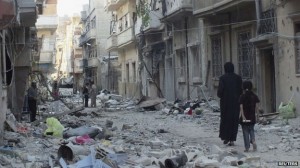 Some expressed concern over the fact that, while women and children would be evacuated, men in rebel-held Old Homs between the ages of 15 to 55 would have to register and “regularise their status”, which is similar to surrender.

It is thought thousands of people remain trapped in Homs, which is divided between rebel and pro-government areas, living in dire conditions, amid an acute shortage of food and medicine.

“This will allow innocent civilians, children and people with special needs, to leave the country,” he said.

“We’re very happy that we found the possibility to bring out these people and to provide those who are in need inside Homs, with the humanitarian aid they deserve.”

The rebel-held Old Homs districts in the centre of the city have been under tight siege from President Bashar al-Assad’s troops since June 2012. [AlJazeera]